Mile High Card Co Spring Auction Bidding Continues! Please take a look at over 1,900 impressive lots in our Spring Auction. Auction ends June 9th! Highlights Include: 1915 D303 Honus Wagner Featuring An Exceptionally Scarce Mothers’ Bread Reverse Advertisement PSA 3 VG.  According to Garner’s Modern American Usage, the word rare means consistent infrequency. Rare is sometimes misused or used too often to describe particular cards so when we see it used we write it off as an exaggeration. Mothers Bread cards were issued in 1916 from a local bakery in New Orleans, Louisiana, and are not only the rarest amongst the food issues but very few other cataloged sets in the ACC can compare in terms of quantity of cards having either being issued or having survived.
Research shows fewer than 40 examples having come to public auction in the past decade and in most cases the players represented were one or two of a kind. These cards carry the D303 ACC designation and are identical in design to the General Baking issue as well as to the Tango Eggs and American Caramel’s E106 sets. However the Mothers Bread cards distinguish themselves due to their unique back advertising, their extremely limited availability as well as some team or position differences. PSA has graded 2 Mothers Bread cards though they have graded 35 General Baking which may include some Mothers Bread cards.
SGC has only graded 31 examples. The 2010 Standard Catalog of Baseball Cards has only listed 22 different cards on its incomplete checklist. Presented here is the key to the set, Honus Wagner in a pleasing PSA 3 condition due mainly to corner wear. The reverse is undisturbed and prominently displays the all important advertisement for The 10 cent Perfect Loaf. This is 1 of the 2 Mothers Bread Honus Wagner Batting cards known to exist. The other one was graded by SGC as Fair.
The PSA population report reflects two D303 General Baking Honus Wagner cards and both are VG 3. One is this Mothers Bread example and the other carries the more common, General Baking back. This is a tremendous opportunity to acquire the key card, of arguably one of the best players to take the field, from an extraordinary limited regional baseball card issue. 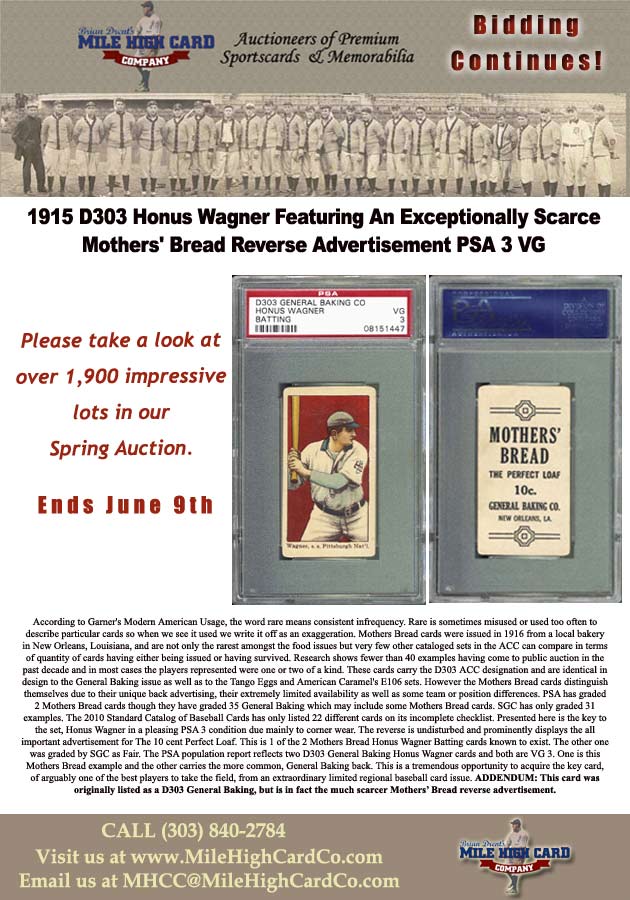