Mile High Card Company will open its September “Extra Innings” Auction on Monday September 15th, with the auction slated to close on Wednesday September 24th. The auction will be featured as all Mile High Card Co. auctions are on the company’s website at www.milehighcardco.com and will close utilizing the standard 15minute rule at 9:00 PM EST on the 24th of September.

“Extra Innings” auctions are Mile High Card Company’s online only auctions and offer collectors a bevy of material from graded cards, to complete sets, autographed material, memorabilia, and everything else from all four major sports. Unlike Mile High Card Company’s traditional high-end catalog auctions, “Extra Innings” is an online only auction with no catalog mailed. The featured September auction includes an impressive collection of over 60 different 1911 T3 Turkey Red Cabinets including the likes of Mathewson, Johnson and Young. 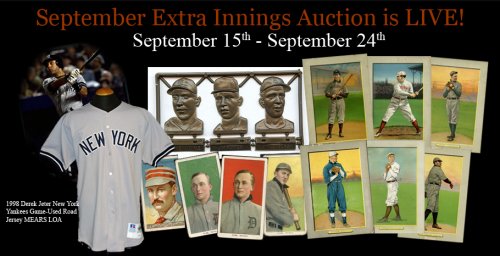 As well there is also an impressive grouping of pre war cards including a nice selection of T206’s highlighted by several Ty Cobb’s most notably a green portrait and a bat on shoulder pose both with Sovereign advertising reverses.  As well the auction includes several complete sets highlighted by a terrific collector grade 1911 T201 Mecca Double Folder Complete set as well as 1954 and 1955 Topps sets.

The auction also has a small but concentrated selection of memorabilia, including a stunning 1998 New York Yankee Road Game Used jersey of Derek Jeter with a MEARS LOA as well as a terrific late 1950’s Kansas City A’s game used hat with attributed to Roger Maris signed by the famed slugger under the bill with a full PSA/DNA letter. The “Extra Innings” auction is nearly 450 lots and will serve as a nice interlude before Mile High Card Company’s December 4th catalog auction.

Mile High Card Company is currently seeking cards and other items including trophies, rings, game used items, advertising pieces and other items from Ruth, Gehrig, Cobb, Jackson, Mathewson, Mantle and others. If you desire the maximum possible return for your prized sports cards and/or memorabilia, please call our office at (303) 840-2784 to speak with one of our team of experts. Additionally, our popular Consignor Incentive Program continues, with all consignors earning reward points and our top consignor earning another in a long line of exceptional rewards.