After a string of record-breaking auctions, Mile High Card Company closes out the 2017 year with an elite December event, headlined by two newly discovered items of autographed memorabilia that are unprecedented; a 1923 Completely Handwritten Babe Ruth Letter with Baseball Content PSA/DNA 9 MINT and a Spectacular Jackie Robinson Single-Signed Baseball JSA, SGC MINT 9, PSA/DNA MINT 9. Both the Robinson ball and the Ruth letter are pristine and absolutely the finest known.

“The Beer Box Find and Beer Box II really made an impact this year and we’re happy to finish of the year with a pair of items that are fresh to the hobby and simply extraordinary!” said MHCC President and CEO Brian Drent.

The Ruth letter is one of only four known fully handwritten examples and appears virtually perfect from start to finish. Addressed to well known Chicago sportswriter Harry Neily, the letter serves as a thank you for a vote that helped Ruth win the 1923 American League MVP award. The Robinson ball has his customary “Best Wishes” greeting and signature on the side panel, triple-authenticated by JSA, SGC and PSA/DNA with the latter two grading it as 9 MINT. Also being offered is a pair of rare, original type I photos of Babe Ruth in the early years of his career; a Spectacular Babe Ruth Rookie-Era Type I Original News Photo (Underwood and Underwood) in Red Sox Uniform and a Tremendous 1919 Babe Ruth Type I Original Photograph in Red Sox Uniform. 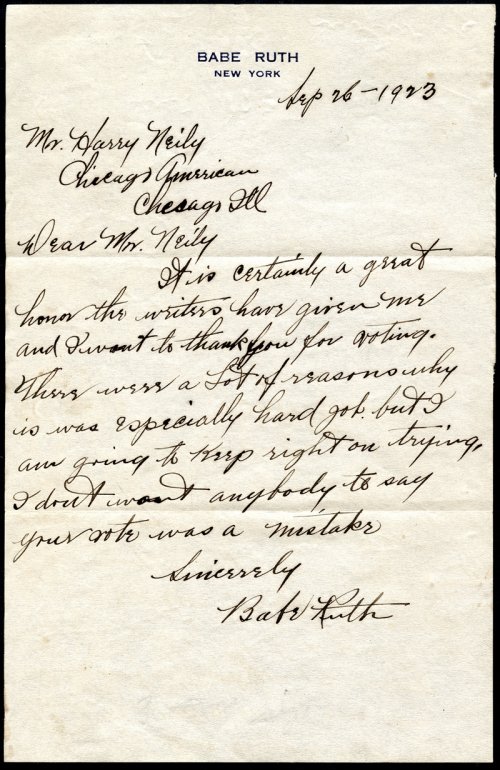 Mile High Card Company is accepting consignments for the Spring 2018 Auction with a consignment deadline of January 26th.. If you desire the maximum possible return for your prized sports cards and/or memorabilia, please call our office at (303) 840-2784 to speak with one of our team of experts, contact us at www.milehighcardco.com.