The last major catalog sale of 2016 has proven to be the richest of the calendar year, drawing $14,037,343 in winning bids (not counting post-auction sales, which have already surpassed $250,000 and remain ongoing through Dec. 4) and carrying the annual sales of Heritage Sports past the $56 million mark. High-grade trading card singles led the charge, with fourteen commanding winning bids in excess of $100,000, including a record $1,135,250 for a PSA NM-MT+ 8.5 example of the celebrated 1952 Topps Mickey Mantle. The card is the first $1 million auction sale of a post-World War II baseball card.

“The results validate the simple formula that has made Heritage the industry leader,” explained Chris Ivy, Director of Heritage Sports Collectibles. “Present the hobby’s finest material to the hobby’s largest bidding audience and record prices will come.” 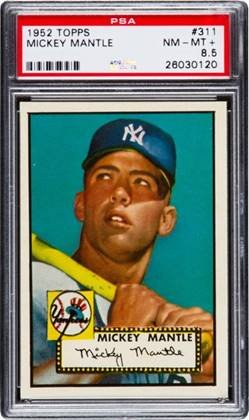 A PSA Good 2 example of the fabled T206 Honus Wagner trounced the standing record for the grade in Thursday’s trading card session, drawing a victorious bid of $776,750 to validate the Old Dutchman’s enduring hobby legacy. PSA Mint 9 rookies from Jim Brown and Ted Williams soared to $358,500 and $239,000 respectively, each shattering the previous record by multiples.

The Gary Carter Collection, featuring the personal keepsakes of the Hall of Fame catcher, headlined the second session of the auction, drawing $550,000 in bids for a wide array of game used gear, awards and general ephemera. Leading the charge was the baseball that recorded the final out of the historic 1986 World Series at $71,700, by far the highest figure achieved for a post-war last out sphere. Carter’s 1980 Gold Glove, earned as the top defensive catcher in the National League, drew an impressive $21,510 result.

Game used relics led the memorabilia offerings in this historic sale, with the ball that recorded the final out of the 1908 World Series, beginning the 108-year World Championship drought that ended just weeks ago, finding a new owner at $119,500. A home white flannel Boston Red Sox jersey from Ted Williams’ final season as American League Batting Champion commanded $83,650, while the fabled black leather high-top cleats of Hall of Fame quarterback Johnny Unitas set a new world record for football footwear at $71,700.