One of the most comprehensive and impressive single-owner New York Yankees collections is at auction June 5th courtesy of SCP Auctions as the Southern California auctioneer celebrates its 40th anniversary in the hobby. The Pinstripe Dynasty Collection features nearly 350 fascinating lots all with one common denominator – the most decorated team in sports history. View the on-line interactive catalog here. Bid, view and register for the auction at scpauctions.com.

Built over several decades, the collection celebrates every facet of Yankees history from its majestic ballparks, magical moments and milestones, to the players and personnel who have shaped the franchise going back to its Highlanders roots in the early part of the 20th century.

At the heart is an incredible run of Yankees team-signed baseballs from 1923 to present, highlighted by exceptional examples from key seasons such as 1923, 1927, 1932 and 1951. In addition, there are hundreds of single-signed baseballs – offered singularly and in groups – demonstrating one passionate man’s relentless pursuit of an autograph from every player ever to don pinstripes. The true character of the collection is its scope and diversity.

This masterful assemblage includes dozens of original photographs (many Type I and autographed), game used jerseys, bats and caps, notable awards, player and manager contracts, tickets, programs and other ephemera with the common thread of quality and historical relevance befitting its subject. Pinstriped legends from every era – from Murderer’s Row to the Bronx Bombers to the Bronx Zoo – are represented including Ruth, Gehrig, Dickey, DiMaggio, Berra, Ford, Mantle, Maris, Munson, Mattingly, Jeter, Rivera, et al.

For the past 100 years, the New York Yankees have produced the most dominant teams and greatest players, while engendering the game’s fiercest rivalries. With 40 American League pennants and 27 World Series titles, the Pinstripers have sustained a standard of excellence and record of success unmatched by any other pro sports franchise in North America, if not the world.

SCP Auctions is proud to celebrate the achievement one of the hobby’s most dedicated purveyors of significant New York Yankee artifacts, most of which are either fresh to the market or have been dormant in the man’s museum-worthy collection for decades. The consignor, whose entire collection exceeds well over one million dollars, wishes to remain anonymous. Online bidding opens Wednesday, June 5th and closes Saturday, June 22nd at www.scpauctions.com.

View the digital catalog below: 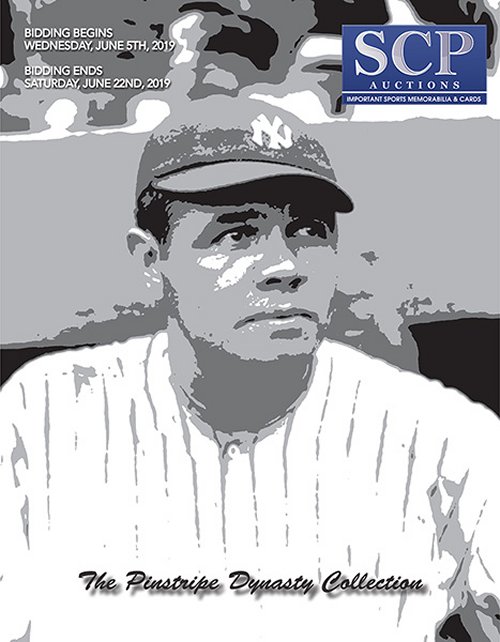