One of only three 1915 Cracker Jack Ty Cobb #30 PSA Mint 9 trading cards known to exist sold for an astounding $432,000, outdistancing its pre-auction estimate by more than $100,000 during Heritage Auctions’Premium Sportscard Catalog Auction June 29. The internet-online auction saw 752 lots realize $4.1 million as collectors picked up some of the highest graded examples of the most iconic trading cards. 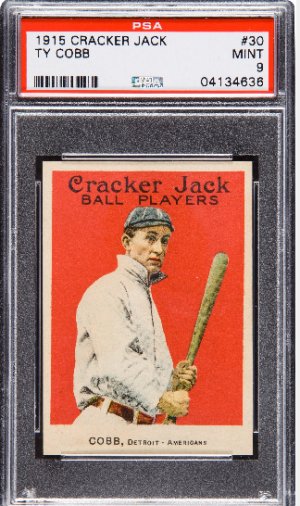 Not since the fabled “Tall Boys” of the 1969-70 Topps issue has a basketball issue boasted such a remarkable assembly of rookie talent as the 1986 Fleer Basketball Wax Box With 36 Unopened Packs. The original Fleer retail box realized $66,000 on the strength of the inclusion of a #57 Michael Jordan rookie card, as well as esteemed stars and Hall of Famers who appear in this set (many their rookie debut) including Charles Barkley, Clyde Drexler, Joe Dumars, Patrick Ewing, Karl Malone, Hakeem Olajuwon, Isiah Thomas, Dominique Wilkins, James Worthy, Patrick Ewing, Magic Johnson, Julius Erving, Larry Bird and Kareem Abdul-Jabbar.

The top items sold in the auction included, but were not limited to: