A mint condition 1952 Mickey Mantle baseball card sold for a world record $2,880,000 in a public auction of rare sports cards on Thursday, April 19, by Heritage Auctions. Consigned directly from the private collection of former NFL lineman and Super Bowl Champion Evan Mathis, the card’s superb condition fueled vigorous bidding resulting in the most expensive price ever paid at auction for a post-war baseball card.

“The 1952 Topps Mickey Mantle card captures the attention of baseball fans, serious collectors, and investors alike and this auction made it one of the most valuable sports collectibles in existence,” said Chris Ivy, Director of Sports Auctions at Heritage. “It’s a phenomenal price, a world record, but it’s also the natural progression of a trend we’ve seen building for years.” Said Ivy, “More and more investors understand that elite collectibles are an asset with that rare tandem of low risk and high 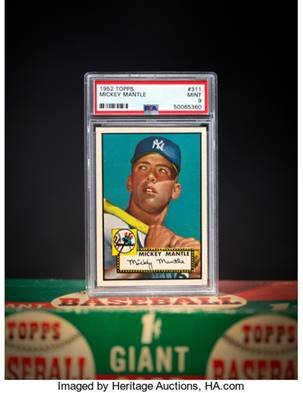 reward.  As more investment capital has entered the market, record prices have self-perpetuated.”

Issued as part of its first set of baseball cards by Topps, the card is one of just six examples graded Mint 9 by PSA, the leading third-party authentication service.

“The 1952 Topps Mickey Mantle is more than just a baseball card, it is pop culture art and the symbol of the card collecting hobby itself,” said PSA President Joe Orlando.

“This new auction record is not only a record for a 1952 Topps Mickey Mantle or any post-WWII baseball card, it is now the new standard for any card other than the 1909-11 T206 Honus Wagner,” he continued. “The fact that the last PSA Mint 9 example was auctioned for $282,588 in 2006 shows the tremendous gains that high-end, iconic sports collectibles have generated during the last 12 years.”

The winning bid surpassed the card’s previous auction record by a staggering $2.6 million, when the last Mint 9 Mantle crossed the auction block more than a decade ago.

Mathis considered the card the best of his high-grade card collection. He offered it through Heritage Auctions for one simple reason: to finance a new home in Tennessee so his wife and daughters may live closer to family.