Representing the grit and fortitude behind the 1980 Team USA “Miracle On Ice” Olympic gold medal-winning hockey team – the upstart team that beat the heavily favored Russians and shocked the world – The Herb Brooks Collection, offered at Heritage Auctions in New York on Saturday night, Feb. 21, 2015, is a direct look into the mind, mettle and mentality of the coach that drove the greatest moment in U.S. sports history.

Consigned directly by Brooks’ family, the trove consists of more than three dozen lots relating to Brooks’ storied tenure at the helm of Team USA, as well as touching on his own days as a player for the Red, White and Blue and his time at the helm of the University of Minnesota Hockey team. 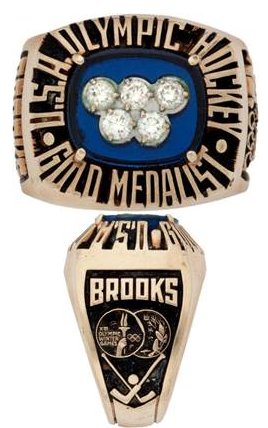 “The name of Herb Brooks inspires reverence and respect in the heart of any American that remembers the ‘Miracle on Ice,’” said Chris Ivy, Director of Sports Collectibles at Heritage Auctions. “This is the first time that his family is opening their archives to make some of the coach’s treasures to the fans that admire him so deeply. It’s a compelling look at the most famous U.S. Olympic moment of them all and the man that masterminded it all.”

Perhaps the most important piece in the grouping is Brooks’ 1980 “Miracle on Ice” Olympic Hockey Ring, presented to the coach after the famed victory. This ring is the third example of this magnificent symbol of achievement that Heritage has offered, with those issued to players Mark Pavelich and Mark Wells appearing at auction in the last few years.

“We’d consider this to be the most significant of all rings issued to that celebrated pack of underdogs,” said Ivy, “the one worn by the man who gave birth to the greatest moment in American sports history. It’s also important to note that the Olympic Gold Medal Ring was the only symbol of victory that Brooks initially received for the Miracle on Ice. He was eventually awarded a gold medal from the USOC, but it is not standard practice and only done after a groundswell of support.”

In terms of insight into Brooks’ thinking regarding his rowdy band of ice upstarts, little could be more evocative than his 1980 Player File and Day Planner Notebooks for US Olympic Hockey Team. This three-volume set provides unprecedented access into the process of constructing of the greatest U.S. sports story. Brooks personal notes that address everything from assembly of the player roster, to practice and competition scheduling, to the lengthy victory lap of banquets and television appearances as a conquering hero in the aftermath of the Lake Placid Games.

“As constant companions during the preparation, the realization and the aftermath of the ‘Miracle on Ice,’ these notebooks are practically sacred texts of the church of American athletics,” said Ivy, “and an inspiration for anyone needing a reminder of the capacity of the human spirit.”

Though Brooks’ underdog Americans played the game of their lives to unseat the seemingly invincible Soviets in the “Miracle on Ice,” the coach was quick to point out that the victory was months in the making and that hard work and discipline were the true keys to that remarkable and improbable achievement. There is nothing in the collection that more vividly recalls the grueling training regimen that Brooks put his team through than his 1980 Training Sweatsuit, Whistle & Stopwatch, items that likely still haunt the nightmares of that 1980 US Olympic hockey team.

The array of relics remembering that long, painful and spectacular climb to the mountain top, includes Brooks’ coaching sweatsuit, a two-piece warm-up suit features a uniquely fonted “USA” over the heart of the zipper-front jacket, Brooks’ coaching whistle and his coaching stopwatch, a battery-powered digital “AMF” timepiece with the word “Herb” appear in dymo tape on the back.

1974 and 1976 University of Minnesota Golden Gophers NCAA Hockey Championship Rings Presented to Herb Brooks: The importance of the University of Minnesota in the realization of American sports’ most glorious and improbable dream is difficult to overstate. Herb Brooks had played his collegiate hockey here (1955-59), returning to lead the team through eight fruitful seasons as head coach. Of the twenty players ultimately chosen to represent the United States at Lake Placid, nine had served as Golden Gophers under Brooks, and it was here that the legendary coach refined the training methodology and game strategies that would pay dividends in Lake Placid.

1968 Herb Brooks Game Worn USA Olympic Hockey Team Jersey: Brooks would share 1968 captain duties with United States and International Hockey Hall of Famer Louis Nanne, one of the leading advocates in Brooks’ quest to be named coach of the 1980 team. The captain’s “C” is applied to upper left chest in patriotic tackle twill, the same format that creates the “USA” on the chest and number “4” on each sleeve and reverse.

2006 Herb Brooks Hockey Hall of Fame Induction Ring: Elected in 2006 to the Hockey Hall of Fame in the “Builder” category, Brooks is remembered for far more than simply his part in the 1980 Miracle on Ice. After winning a championship in high school in the crowded and competitive state of Minnesota, Brooks went on to play for the University of Minnesota, followed by several years in the 1960s on the U.S. National and Olympic teams, three NCAA championships, NHL duties coaching for the Rangers, North Stars, Devils and Penguins. As well as coaching the French Olympic team in 1998 and Team USA again in 2002. The ring was presented to Brooks’ family at his 2006 posthumous election to the Hockey Hall of Fame.