A unique, multi-signed baseball authenticated by PSA/DNA, sold this past weekend for an astounding $623,369. It was sold at auction by a Laguna Niguel, California based auction house. What made this baseball so special is the fact it was signed (at the time) by the 11 living members of the Baseball Hall of Fame’s inaugural induction ceremony who were present that day (June 12, 1939) in Cooperstown, New York.

The signatures on the baseball are unrivaled: Babe Ruth, Ty Cobb, Honus Wagner, Cy Young, Walter Johnson, Tris Speaker, Connie Mack, Eddie Collins, Pete Alexander, George Sisler and Nap Lajoie. Only the great Lou Gehrig, who was being diagnosed that week with ALS at the Mayo Clinic in Rochester, Minnesota, was missing from the celebration that day. The final price realized set a new auction record for a signed baseball, one that was graded “authentic” by PSA’s Principal Authenticator, Kevin Keating. 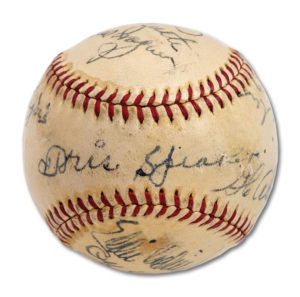 “This may be the most noteworthy, complete and exclusive collection of the Hall of Fame’s living charter inductees known,” said Keating. “Most items signed by the icons who first entered Cooperstown in 1939 are also signed by other players and dignitaries who were present that day. This baseball possesses a complete roster of only those living players whose plaques were unveiled.

“The single panel of Cobb, Ruth and Wagner is what puts it over the top. Those are the elite of the elite.”

The above article was written by Terry Melia – Terry Melia is a hobby veteran who has served in various PR and marketing roles for industry movers. He is currently working as PSA’s Public Relations Specialist.