The gloves that Muhammad Ali wore in his 1971 Championship bout against Joe Frazier – the first of three fights between the two giants of pugilism, which would culminate in the legendary “Thrilla in Manila” – will cross the auction block on Thursday night, July 31, 2014, in Heritage Auctions’Sports Collectibles Platinum Night Auction at The House of Blues in Cleveland, OH.

“This match was billed as ‘The Fight of the Century,’ and, despite the fact that Ali lost, it more than lived up to its billing,” said Chris Ivy. “It was a controversial fight at a controversial time in America and the bout took on distinctly political and cultural overtones. These gloves are more than sports memorabilia; they’re artifacts of early-1970s American Pop Culture.” 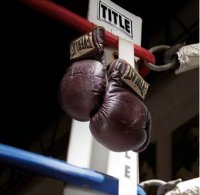 At the time, both fighters owned a legitimate claim to the Heavyweight Championship of the World, though only Frazier held the title officially. Ali’s reign, which had begun in 1964 when he had beaten Sonny Liston, ended because of his refusal to enter the Vietnam draft. He became the most polarizing figure in American sports, fueling an antipathy within a segment of the American populace unseen since the reign of Jack Johnson. The country was polarized around the match: those who supported the Vietnam War and the failing cause of racial segregation vs. the anti-war crowd and those who favored the Civil Rights movement.

“To top it off, each combatant was guaranteed $2.5 million for the bout, a record purse that lent perspective to the enormity of the contest,” added Ivy. “The fight sold out a month before the event with ringside seats commanding a record $150, with even Frank Sinatra unable to get his hands on one. He ended up with a press credential, taking photos ringside for Life Magazine. The bout was quite literally the most star-studded event in Big Apple sports history.”

Ali dominated the early rounds with deft footwork and a pumping jab. Frazier stalked the elusive former Champ, looking to uncork the devastating left hook that had spelled doom for many of his earlier victims. Slowly the tide began to turn as the fight wore on, Frazier’s sledgehammer blows exposing the ring rust on the former Champion.

Ali continued to paw at Frazier’s face but the answers came with far more punishing authority and, in the late rounds, it was evident that only a knockout could salvage the night for the Louisville Lip.

“It was Ali that nearly ended up getting knocked out in the fifteenth round at 2:34,” said Ivy. “It was the exclamation point to Frazier’s dominating victory. All three judges declared Frazier the victor, setting the stage for the 1974 rematch at MSG and the historic finale to the trilogy at Manila in 1975.”

These gloves, according to Heritage specialists, are the most significant boxing gloves to reach the auction block since those worn by Ali to claim his first World Championship from Sonny Liston in 1964 drew a final bid of $836,500 in a Heritage auction in New York City. Like those gloves, these derive from the personal collection of Ali’s renowned trainer Angelo Dundee.

This first professional loss for Muhammad Ali gave birth to the narrative that the former Champion was now a “has-been” who should have remained in exile from the sport, setting the stage for what may be his most celebrated victory against the heavily-favored George Foreman in Zaire. Though Ali would publicly decry the loss, he privately acknowledged the legitimacy of Frazier’s victory, setting a course for his own redefinition from an arrogant invincible to resilient three-time Champion of the World.

“In order to be a three-time World Champion, Ali had to lose twice,” said Ivy. “This was the fight that steeled his resolve and set him firmly on the path to becoming the Greatest of All Time and one of the most beloved athletes of any sport, or any nation, in history.”