The record-setting two-part Goldin Auctions 2020 Holiday Auction concluded on Sunday night grossing over $14 Million in total sales. Highlighting the auctions were the modern trading card records as the auction was filled with new highs including a 2013-14 Prizm Black Mosaic Giannis Antetokounmpo Rookie Card 1/1 that sold for $1,168,500 setting the record for highest priced unsigned Modern trading card. Also included was a 1999 Pokémon Charizard 1st Edition card that has now sold as the highest ever Pokémon trading card with a final sale of $369,000.

A 1948 Bowman Jackie Robinson Rookie card smashed the previous record and fetched an incredible $400,980, the highest price paid for any Jackie Robinson Rookie card, breaking the previous mark of $336,000 paid for a PSA 9 MINT graded example. Another record set was the 1986 Fleer Michael Jordan Rookie card graded GEM MINT 10 by PSA with a sale of $211,560, which breaks the record of $151,000 Goldin set earlier this week on just Monday December 7th. In addition to these records, there were many other records were also set and have been listed below including the highest price ever paid for a Steph Curry card at $616,230.

Another auction highlight was the Double Fantasy Album John Lennon Signed for Mark David Chapman on the night of his assassination that sold for a record $922,500 making it the most expensive Album of All time topping another Beatles Album, Ringo Starr’s personal copy of the Beatles White Album that sold for $790,000.

“The number of records set in our Holiday Auctions is incredible,” said Ken Goldin, Founder of Goldin Auctions “It clearly demonstrates a combination between the power of our marketing with the increased demand for cards and memorabilia. The future of the Hobby in general and Goldin Auctions looks very bright!” 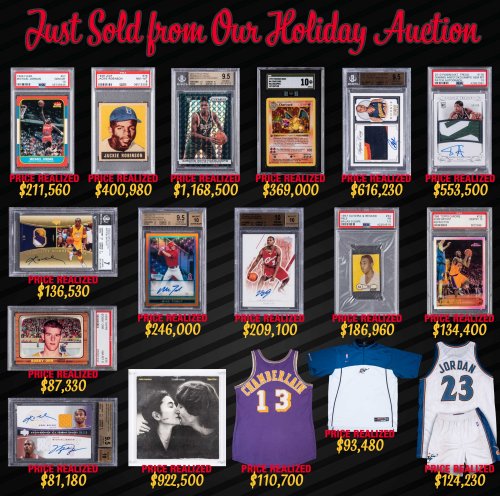 Goldin auctions is actively accepting consignments for its upcoming Goldin Elite Auction which we anticipate taking place in January and our Winter Auction which will take place in February of 2021. To get into the next auction end you can consign by emailing an image and description of your items to info@goldinauctions.com.

Here are some final sale prices from Goldin Auctions 2020 Holiday Auction (*indicates a record price). The complete auction results are available at GoldinAuctions.com.