The world’s largest sports collectibles auctioneer dropped the hammer on more than 2,200 trading card lots late last week, recording more than $8.3 million in a highly competitive online auction. The sale contained the first of three 2019 offerings in Part I of The David Hall T206 Collection, the most comprehensive assembly of the hobby’s premier tobacco issue.

That incredible collection from the founder of Collector’s Universe supplied three six-figure results to the eye-popping Heritage tally, the most astonishing result of the sale being the $252,000 price for the rare Eddie Plank, graded PSA VG 3, more than doubling a competitor’s sale price for an EX 5 example less than two years ago. A Red Background Ty Cobb with a Hindu back commanded $126,000 at VG-EX 4, while the only PSA-graded Walter Johnson Hands at Chest with a Broad Leaf back drew $108,000 at VG-EX+ 4.5. 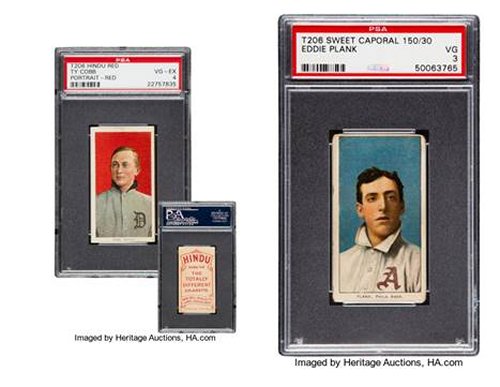 “The prices recorded in this sale probably added tens of millions of dollars to the value of the T206 cards held by our clientele, so we expect to be fielding a great deal of consignment calls in the coming weeks,” said Chris Ivy, Director of Sports auctions for Heritage. “We sold a PSA NM 7 Plank for $690,000 last year. What could that be worth now?”

But the record prices recorded in the three-day event were not restricted to that single issue, instead spanning multiple decades and issuing bodies. One of two PSA EX 5 examples of the 1922 Zeenut Jim Thorpe posted a $44,400 result, while a 1933 Butter Cream Babe Ruth, graded PSA EX 5, cost its new owner $192,000. Mickey Mantle’s second Topps card, graded Mint 9, crushed hobby norms at $396,000.