The 34th Annual National Sports Collectors Convention will be hosted by The City of Chicago at the Donald E Stephens Convention Center July 31 – August 4, 2013. Open to the public, the five (5) day family-oriented event is the largest sports and entertainment collectibles show in the world. It’s a place where sports/entertainment collectors, fans and dealers can meet to buy, trade and discuss collecting memorabilia such as trading cards, vintage game-used equipment and other sports and entertainment related collectibles, as well as meet athletes and get autographs.

Not only is this a once-in-a-lifetime experience for collectors and fans, but businesses in the City of Chicago such as retailers, downtown restaurants, hotels, and rent-a-car companies will benefit financially from the event. Here’s a brief snapshot of what hosting this event will mean for Chicago: 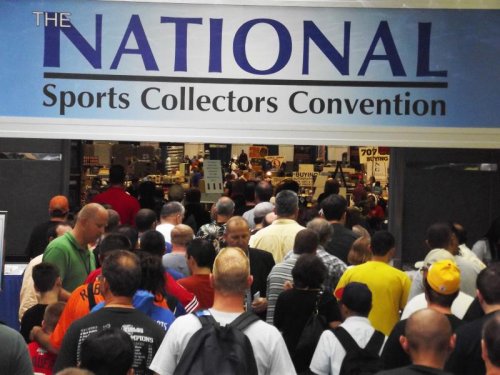 “We are extremely excited that the 34th Annual National Sports Collectors Convention is returning to Chicago,” said John Broggi, NSCC Executive Director / Promoter. “Chicago has an exceptionally strong sports tradition with very avid and knowledgeable collectors and a diversified sports fan base. Over 750 exhibitors from around the country and 90 high-profile athletes will be signing throughout the event.”

The organizers of the 34th National Sports Collectors Convention are pleased to announce that the 2013 event will welcome the return of a pavilion dedicated solely to collectibles from the Olympic Games. The 2011 National in Chicago marked the first appearance of an Olympic Pavilion and both attendees and exhibitors alike were extremely pleased. 1968 Olympic Gold Medalist Bob Beamon (Long Jump) and Dick Fosbury (High Jump) will be signing autographs within the Olympic Pavilion throughout the duration of the five (5) day show.

NATIONAL WEBSITE: www.NSCCShow.com has the list of players signing along with their designated days and times with the ability to purchase and print your admission and autograph tickets on-line to avoid the lines on-site, event up-dates, VIP package description, operating hours, etc.

Public admission and autograph tickets for the 2013 National Sports Collectors Convention will also be available throughout the week on-site at the Donald E Stephens Convention Center. General admission tickets for children under 12 are FREE.