“It’s gotta be the shoes!” In those immortal words spoken by Spike Lee’s fictional character Mars Blackman in countless Nike commercials during the mid-‘80s, these are the shoes! An extremely rare pair of autographed and game-used Nike Air shoes worn by arguably the NBA’s greatest player ever have surfaced from Michael Jordan’s 1984-85 rookie campaign with the Chicago Bulls. This pair was worn by “His Airness” in an away game versus the Los Angeles Lakers at The Fabulous Forum on Dec. 2, 1984, just prior to the official unveiling of Jordan’s first line of Nike Air Jordans. The shoes that Jordan wore in the Bulls’ 113-112 victory in which he scored 20 points will now be featured in SCP Auctions’ 2015 Spring Premier starting April 8 at www.scpauctions.com. The signed shoes are expected to fetch $50,000 or more.

“These are very rare shoes indeed,” said SCP Auctions spokesman Dan Imler. “Jordan actually handed these to the attending Lakers’ ball boy after the game and they have stayed in his possession for the past 31 years. Their provenance is flawless.”

The pair has been in the possession of the former Lakers ball boy for the past three decades. They’ve been taking up space in his closet, as well as his mom’s closet for the past 30 years, and he finally decided it was time to put them up for auction. His name is Khalid Ali and believe it or not, as a 15-year-old ball boy he had the tenacity to walk up to Michael Jordan during the Bulls pregame warm-ups and literally ask him for the shoes. 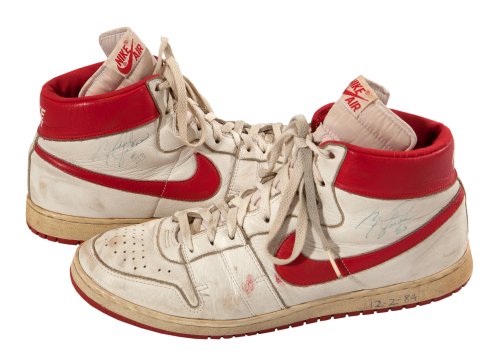 The backstory is that he originally asked Jordan for a pair of tri-color (red, black and white) Nike shoes that Michael was simply breaking in during warm-ups. “They were an intriguing blend of multi-colored Nike shoes,” recalled Ali. “I had never seen a pair of Nike shoes with three colors before.”

After shoot-arounds, however, Jordan went back to the locker room and came out for the game wearing a completely different pair of white Nike Air shoes with the red swoosh. Those are the shoes he gave to Ali in the Bulls locker room following the game. According to Ali, Jordan even grabbed a pen out of his duffle bag and signed them both. These are considered the first ever pre-Air Jordan gamers to hit the hobby. He only wore this style of shoe during the early portion of his rookie campaign before switching full time to Air Jordans later in the season.

Online bidding, open to registered bidders, will run for two-and-a-half weeks and conclude on Saturday, April 25. The auction will be conducted online at www.scpauctions.com. For more information, call 949-831-3700.