A rare and important letter written and signed by then presidential candidate William Henry Harrison in 1840 defending his conduct at the Battle of the Thames (est. $25,000) highlights Heritage Auctions’ offering of nearly 100 lots from the estate of Malcolm S. Forbes. The comprehensive collection of hand-written speeches, doodles and addresses by John F. Kennedy and Theodore Roosevelt among others will cross the block Oct.  19 in Dallas.

“In the pantheon of skilled collectors, few stand out like Mr. Malcolm S. Forbes,” said Sandra Palomino, Director of Historical Manuscripts at Heritage Auctions. “His unbound curiosity combined with his scholarly view of American history made his collection one of the most important.”

The two-page Harrison letter is a standout piece as the candidate defended himself against allegations that he was absent during the Battle of the Thames during the War of 1812. The letter is a crucial defense of the candidate’s main campaign plank as a war hero.

Additional highpoints in the collection include a signed and inscribed address Theodore Roosevelt delivered to the Illinois State Bar Association in 1916 stating his position in favor of entering World War I (est. $5,000), future President Andrew Johnson’s marriage certificate from 1827, a typed statement by Woodrow Wilsonon the League of Nations from 1920, and a Franklin D. Roosevelt signed photograph in a silver presentation frame inscribed to his wife and political partner Eleanor.

Perhaps the most telling group in the collection are the hand-written speeches, addresses and even doodles by President John F. Kennedy. Among them are a1957 set of hand-written notes, written for a speech as the head of a Senate committee (est. $3,000); a legal-sized sheet of doodles, including a sailboat and a reference to the Berlin Wall (est. $1,000); and a 1958, six-page typescript manuscript of remarks made in observance of Israel’s 10th anniversary  — with various emendations throughout in Kennedy’s hand mentioning his historic description of “the enemy at the gate”(est. $2,000). 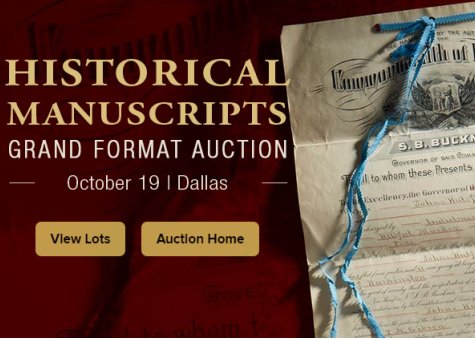