Although not as popular as the 1941 Play Ball issue, the blank-backed 1941 Double Play set gave kids something Play Ball could not: two players on one card. Imagine then the delight of the young fan who pulled this dual player card of Yankees heroes Joe DiMaggio and Charlie Keller from a pack of Double Play in the summer of ’41. Manufactured by Massachusetts-based Gum Products, Inc., this was the last major baseball card release prior to America’s entry into World War II. Due to the seriousness of the global conflict and the U.S. government’s wartime need for paper, frivolities such as gum cards were essentially put on the back burner until 1948. In fact, the period between 1936-1947 was a time when precious few card sets of any kind were produced, and thus DiMaggio is found on only seven major releases during his illustrious 13 year career. 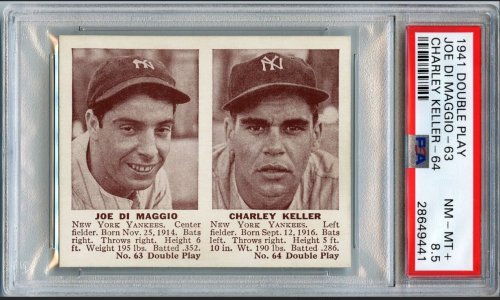 Offered here is one of those lucky seven. With all due respect to Mr. Keller, who had a very respectable big league career (not to mention a great nickname: King Kong!), this card is all about the man from Martinez, California. Ask any DiMaggio collector which is the hardest of Joe’s seven mainstream cards to find in mint condition and they’ll be quick to tell you it’s his 1941 Double Play. PSA has not awarded a Mint 9 or better grade to any ’41 Double Play DiMaggio/Keller card, ever. Thus, the offered example, a nearly spotless PSA 8.5 NM-MT+ specimen, is the highest graded copy of this notoriously condition-sensitive card, with just one other equaling it. Although we’ve never seen that other 8.5, the compelling mint to gem mint qualities of the offered card have us convinced that it is likely the single finest copy in existence. The 1941 season was a special one for DiMaggio and the Yanks. This supremely well-preserved relic from that legendary ’41 campaign can be yours with a winning bid.