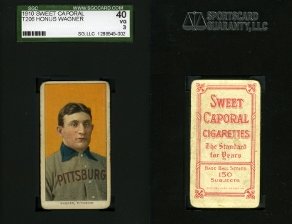 (Reported by T206Resource.com) – As if an abundance of buzz wouldn’t be generated by a nearly complete T206 set hitting the auction block, an upcoming offering should have collectors talking for a variety of reasons. A set break of 523 of a possible 524 cards will be auctioned by Goodwin & Co. in April. Missing only the Joe Doyle (N.Y. Nat’l) card, the collection will include a Honus Wagner that’s been in the consignor’s possession for the past quarter-century or so.  As hard as it is to imagine a somewhat “new” Wagner on the market playing second fiddle, that might be the case here.

The Eddie Plank has a Piedmont 150 reverse, one of only four of that front-back combination known in the hobby. The other three all have been professionally graded as being “authentic” because they are hand cut. This example, however, was graded recently by Sportscard Guaranty and resides in an 70/5.5 holder (excellent).

The Wagner is now in a 40/3 SGC holder, and the Sherry Magie error card has been graded 80/6 by SGC. Images of these three cards are below.

The next Goodwin auction will begin February 25. The plan is for the near-set to be offered as individual cards in 523 lots in an April auction.

The Classic is Coming From Lelands – Here’s A Preview