For anyone who has ever collected an autograph, the just-released book entitled “Waiting for a Sign” is a must-read. Author Kevin Keating has spent a lifetime collecting autographs from some of the biggest names in baseball. A native of suburban Chicago’s Lake in the Hills, Illinois, he spent much of his youth acquiring thousands of signatures from major leaguers visiting the Windy City to play against his hometown Cubs or White Sox. By the time he graduated from high school, he had amassed more than 10,000 autographs.

One of Keating’s favorite locations to acquire signatures was the entrance to The Executive House hotel (now the Wyndham Grand Chicago Riverfront) where the visiting teams stayed. He also wrote to retired players through the mail, always enclosing a self-addressed stamped envelope. “Waiting for a Sign” chronicles Keating’s personal journey through decades of encounters and correspondence with some of the sport’s most important and colorful personalities.

In the 348-page book (Volume 1 of 2) with more than 100 illustrations, Keating describes many memorable meetings and some near misses with such Major League Baseball legends as Ted Williams, Joe DiMaggio, Hank Aaron, Rod Carew, Stan Musial, Mickey Mantle and Roger Maris. And he recounts how he befriended many of the game’s greats including Hall of Fame members Yogi Berra, Whitey Ford, Johnny Mize and Joe Sewell. In fact, the book includes a foreword by Ford and a cover blurb from best-selling baseball author George F. Will. 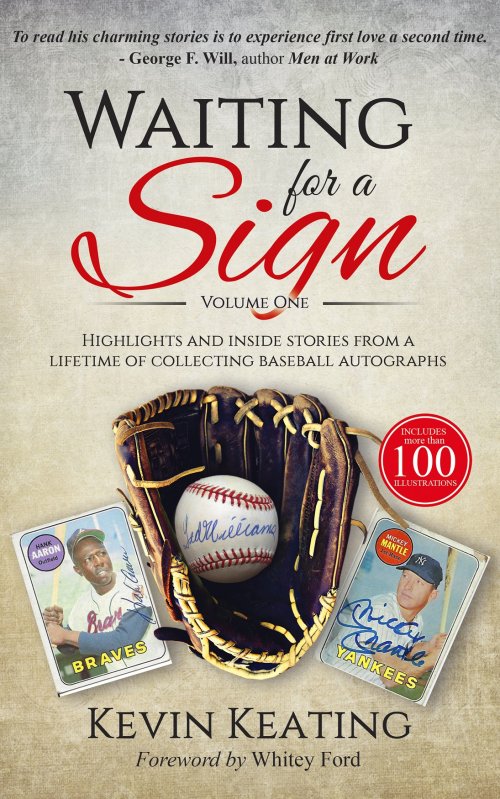 In every chapter, Keating takes the reader with him to meet his heroes as they disclose their off-field character and personalities to this superfan through his autograph encounters. In these never-before-told stories, he also reveals the magical appeal of autograph collecting as a personal connection between the collector and the collected. Whether you are a serious autograph collector or just a sports fan hoping to get a behind-the-scenes look at the people within the players, the book delivers at every turn. “Waiting for a Sign” is now available at Amazon ($21.95) and Kindle ($9.99), as well as at Barnes & Noble and other fine book stores.

Keating, a former U.S. Army Captain and graduate of the Johns Hopkins School of Advanced International Studies, is the principal autograph authenticator for Professional Sports Authenticator (PSA) in Newport Beach, California. He currently resides in Alexandria, Virginia, with his wife and two sons.

PSA is the world’s largest trading card, autograph, and memorabilia authentication and grading service. Since 1991, PSA experts have examined and certified over 30 million collectibles with a combined value of more than $1 billion. For more information, visit www.PSAcard.com.