Additional memorabilia sold in the auction included a Speedo swimsuit used by Michael Phelps in the 2008 Olympics and signed by the superstar swimmer the night he won his record eighth gold medal ($8,270), a 1960s Brian Piccolo Chicago Bears jacket ($5,797), a 1941 Hugh “Shorty” Ray signed NFL Football Record Book ($11,692), and the helmet worn by Los Angeles Rams quarterback Roman Gabriel ($7,339) when he suffered a concussion during a 1970 game and subsequently used the following year in government hearings regarding the effects of head trauma on artificial turf.

Lelands.com also auctioned off a vintage 1927 Lou Gehrig photo by Charles M. Conlon from “Baseball Magazine” — “The Sultan of Swat’s Probable Successor” ($13,001) and a 1975 Boston Red Sox World Series ring from the general manager ($5,513). See these and all of their prices realized from this auction at www.lelands.com

Lelands.com is seeking consignments for their May 2016 auction which closes in one week. Contact Lelands.com today and let them help you achieve world record prices for your collectibles. 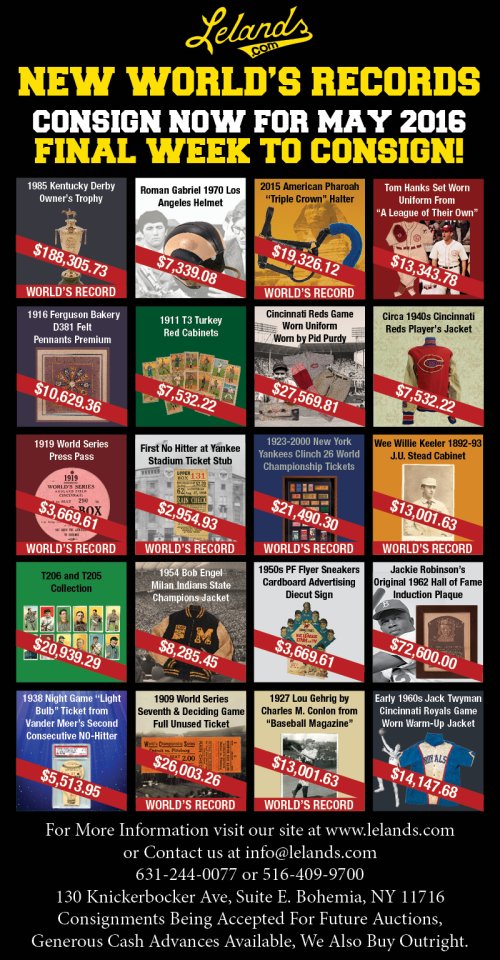 About Lelands
Lelands (www.lelands.com) is the industry leader in sports and Americana memorabilia. Founded in 1969 as the world’s first sports auction house, Lelands pioneered the move into high-end, Internet-based catalogue auctions in 1988. In the 1990s, Lelands opened its offices in Manhattan, where it held the first- ever live sports auctions, generating star-studded crowds and major news including the sale of the Buckner ball. In 2000, Lelands auctioned the Charlie Sheen Collection, considered the finest “quality” baseball collection ever assembled. In 2012, Lelands purchased and sold a 1920 Babe Ruth New York Yankees jersey for a world record for a sports piece – more than $4.5 million. Two years later, Lelands became the dominant player in horse racing memorabilia beginning with the sale of the Seabiscuit collection of Christopher Lowe. In 2015, Lelands offered for private sale the personal collection of 1980 Olympic hockey star Jim Craig, including his gold medal, jerseys from the Soviet and Finland games, and the iconic flag he wore on his shoulders after the “Miracle on Ice.”