Mile High Card Company’s April 2016 auction begins on Monday, April 18th and leads off with an incredible find; a newly discovered 1915 Cracker Jack advertising poster in completely original and unrestored condition. While it’s possible that one of these was prominently displayed in every candy store and five and dime that sold Cracker Jack in 1915, the number of surviving specimens can be counted on one hand and the featured item comes from being found it in a barn in the Midwest, where it likely sat for the duration of its existence.

Given the same attention to detail that has made the 1915 Cracker Jack series one of the most coveted collections of all-time, the front of the display poster features examples of twelve stars that appear in the series: Ty Cobb, Eddie Collins, Tris Speaker, Honus Wagner, Joe Jackson, Joe Tinker, Johnny Evers, Stuffy McInnis, Vic Saier, Rabbit Maranville, and George Mullen. The reverse suggests “Millions of Pictures of the World’s Greatest Baseball Players-Free, a picture in each package of Cracker Jack” and provides details on how customers can get the complete 176-card set via a mail-in offer. Store owners were instructed to “Place this show card in a prominent place. It will help sell CRACKER JACK.” and touts the series as “the finest collection of baseball pictures ever issued.” Over a century later, even with the 1933 Goudey series and 1952 Topps set coming on to the scene decades later, many vintage card hobbyists still view the ’15 Cracker Jack series as baseball’s pinnacle assemblage. 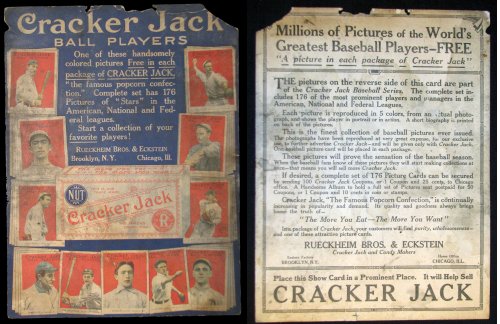 While it would be difficult to place a value on this exceptional collectible, we can report that the last time one was offered was in 2009, when only 2 were known to exist, and sold in excess of $150,000. With the current market for NM/MT or higher grade singles of Joe Jackson, Ty Cobb and others reaching well into six-figure prices, we are confident that if the previously offered Cracker Jack poster were available, it would likely sell for at least double that price in today’s market. The poster’s condition is not without fault, easily overlooked by the absolute sheer rarity of the item with the winning bidder retaining the option to have the piece professionally cleaned or completely restored, We have contacted several restoration services and have been given feedback that suggests the item is an ideal candidate for either, information which we will happily supply upon request or act as an intermediary on their behalf.

This extraordinarily important piece of American history is one of many world-class items featured in the upcoming MHCC auction, which runs from April 18th – May 5th. MHCC is already lining up some spectacular items for the July/August auction that will be prominently displayed at the 37th National Sports Collectors Convention in Atlantic City August 3rd-7th, and there’s still time to be a part of it. If you desire the maximum possible return for your prized sports cards and/or memorabilia, please call our office at (303) 840-2784 to speak with one of our team of experts, contact us at www.milehighcardco.com, or visit us at the Ohio Sports Collectors Convention April 15-17, 2016.