From year to year, Heritage Auctions’ famed Platinum Night catalogs have showcased some of the most intriguing and significant pieces in hobby history. From Curt Schilling’s famed bloody sock, to the bat shard that Roger Clemens threw at Mike Piazza in the 2000 World Series, to the heavyweight championship belt presented to Muhammad Ali in the 1970’s , the museum-caliber, head turning offerings keep coming and the pieces in our upcoming February Platinum Auction will most certainly follow suit.

While non-hockey enthusiasts may think the lot highlighted here may have originated from a horror film, knowledgeable hobbyists will be quick to point out that this Rogie 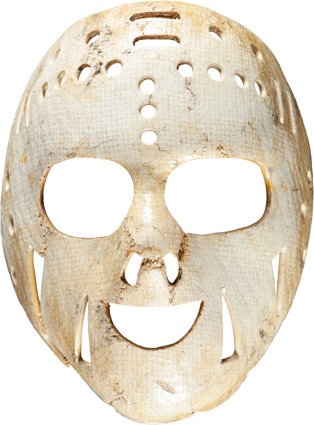 Vachon game-worn goalie mask is widely considered one of the most famous masks in NHL history.

The first of its kind ever to hit the auction block, it was worn by the Hall of Fame net-minder during his tenure in Los Angeles, and makes its hobby debut in Heritage’s February 23-24 Platinum Auction. Consigned by the grandson of a close buddy of Vachon’s, a semi-professional hockey player who lived in the Hall of Fame goalie’s Los Angeles neighborhood of Brentwood, it displays a handwritten notation inside the puck-battered fiberglass reads, “1975-76”. In addition, the mask has been definitively matched to a period photograph through its array of scuffs and scrapes, and according to Resolution Photomatching, “the mask was likely worn in a significant number of games, and may have been worn across multiple seasons.” Click here to view full lot preview.