Millions of dollars’ worth of previously unknown sports memorabilia will be brought to market for the first time in Heritage’s Feb. 21, 2015, New York “Platinum Night” auction, currently open for bidding online. The live auction will take place at the Fletcher-Sinclair Mansion (2 E. 79th Street, at 5th Ave.) in New York City. “Heritage has enjoyed a well-deserved reputation for unearthing rare and important sports memorabilia for years,” said Chris Ivy, Director of Heritage Sports Collectibles,  “but this February 2015 Platinum Night auction represents the largest and most significant offering of ‘fresh” material in hobby history.  Opening the pages of our auction catalog is like stepping into the sports version of King Tut’s Tomb.”

Leading the charge are both pairs of gloves worn by the combatants in the second battle between Sonny Liston and Muhammad Ali, a bout known to history as “The Phantom Punch Fight” due to the sudden and controversial conclusion that provided sports photography with its most famous image. That photo by Neil Leifer – a menacing Ali standing over the fallen Liston – was featured on the cover of Sports Illustrated’s 1999 volume celebrating the greatest shots of the century. 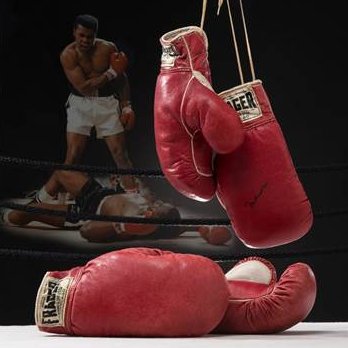 The personal collection of early Cleveland Plains Dealer photographer Frank W. Smith emerges from over a century of storage to document Alexandria, Louisiana spring training imagery capturing the Cleveland Indians (then called the “Naps”) and the New York Giants (now headquartered in San Francisco).  Smith approached each subject for an autograph, encouraging even the illiterate legend “Shoeless Joe” Jackson to scrawl his autograph to his personal image, creating the only known signed image from the star of the 1919 Chicago Black Sox known to exist.  Other subjects include Hall of Fame icons Napoleon Lajoie, Christy Mathewson and John McGraw.

Four remarkable collections from former superstars of the American sports world will likewise debut in this Platinum Night event, with two Big Apple Hall of Famers returning to the city of their greatest achievements:

The Roger Bresnahan Collection features the earliest known World Series final out ball, used to end just the second Fall Classic in history in 1905. Charles “Red” Ruffing, one of the greatest pitchers in New York Yankees history, supplies an array of Championship rings and awards to the event, as does fellow pinstriped hurler Spurgeon “Spud” Chandler.

Also of tremendous interest will be the collection of Herb Brooks, the mastermind of the “Miracle on Ice,” who inspired his underdog Olympic hockey team to defeat the Soviet Union in the 1980 Lake Placid Games. The great coach is celebrated with the offering of a wide array of relics from a lifetime at the sport’s highest level.

Other highlights on offer within the auction include:

Heritage Auctions is the largest auction house founded in the United States and the world’s third largest, with annual sales of more than $900 million, and 900,000+ online bidder members. For more information about Heritage Auctions, and to join and receive access to a complete record of prices realized, with full-color, enlargeable photos of each lot, please visit HA.com.