Goldin Auctions, in partnership with Steiner Sports, is offering several of the highest grade PSA graded baseball card sets in the world from the Jeffrey Gitomer collection in its current October Legends auction, running through Nov. 1 at www.GoldinAuctions.com.

“While Mr. Gitomer may not have tried to build a wide array of sets, the sets that he chose to collect he did so with unparalleled tenacity with condition being of key importance,” explained Ken Goldin, Founder of Goldin Auctions. “We are honored to be the auction house chosen to handle the sale of these cardboard gems.”

Headlining the spectacular offering is the finest 1939 Play Ball set on PSA’s Set Registry. Due to Mr. Gitomer’s penchant for purchasing the highest-grade cards that were available, he would often buy multiple examples of the same cards in the same grade, just to be sure he was placing the finest example in his sets. In preparing the set for auction, Goldin Auctions also went through the collection to hand pick the “best of the best.” Two of the highlights of the set are a MINT 9 Ted Williams rookie card and MINT 9 Joe DiMaggio card. Among the dozens of Hall of Famers in the set are Bill Dickey, Mel Ott, Lefty Gomez, Carl Hubbell, and Hank Greenberg.

The 33-card 1954 Red Heart sets was issued with Red Heart Dog Food in three series of 11 cards with the sets differentiated by three different colors – red, blue and green. Such stars as Stan Musial, Mickey Mantle and Duke Snider are included. 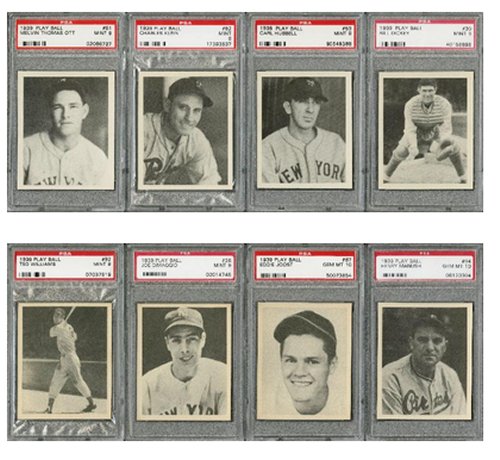 In 1974, Topps issued scalloped cut Deckle Edge cards in limited distribution in the Northeast. Made to resemble movies star photos, these cards were oversized versions of the 1974 Topps base set printed in black and white. The cards, measuring 2 7/8 by 5 inches present a blue facsimile signature on the front of each card. Consisting of 72 total cards, the checklist is dominated with star players of the era including Nolan Ryan, Tom Seaver and Hank Aaron.

The 1960 Nu-Card Hi Lites is comprised of 72 different oversized cards (3 ¼ x 5 3/8) each printed in red and black and made to look like a newspaper headline. The cards in the set represent remarkable achievements from some of the game’s top players including Babe Ruth hitting three homers in a World Series game; Joe DiMaggio’s 56-game hitting streak: and Willie Mays’ great World Series catch.

Other highlights of the Goldin Auctions October Legends event include M101-6 (Felix Mendehlson) card of “Shoeless Joe Jackson – making it the rarest Jackson baseball card in the world and The Cambridge Collection – a massive 2,200 card collection from the early 1890’s, and a rare 1936-38 Lou Gehrig game-used bat.

About Goldin Auctions
Sports memorabilia impresario Ken Goldin has sold more than $600 million in memorabilia from many of the biggest names in sports, history and pop culture and was the pioneer of using the medium of television to sell sports memorabilia. Earlier this year, Goldin Auctions sold a Honus Wagner T206 card for a public sale record $2.1 million. Goldin Auctions strives to break new ground and offer collectors the best in collectible treasures up for auction in the marketplace. All game worn or autographed items come with team, player, league or additional LOA from industry leading authenticators; and collectors can bid with confidence that their proxy/ceiling bids remain confidential. For more information, visit www.goldinauctions.com or follow on Twitter @GoldinAuctions.