An Omaha Beach D-Day Flag that was flown on LCT Landing Craft emerged from Heritage Auctions’ $1.1 million Arms & Armor, Civil War & Militaria auction as the top lot in Dec. 11 in Dallas. The flag, with 48 stars and frayed edges, realized $45,000. It was one of a trio of flags that brought the three highest returns in the Dec. 11 auction.

In the runner-up position was a Confederate Second National Flag, “The Stainless Banner,” that was captured Feb. 16, 1865 at Battery Bee in Charleston (S.C.) Harbor. This completely hand-stitched flag, which after years of fraying has been reduced from its original 96-inch length to about 92-1/2, was coveted by more bidders than any other lot in the auction, who drove the return up to $40,000, while a wool WWII Royal Navy Ensign that was flown from the British Landing Ship S.S. Empire Crossbow at Gold Beach on D-Day (June 6, 1944), along with an engraved brass plaque detailing the flag and its background, brought $27,500. 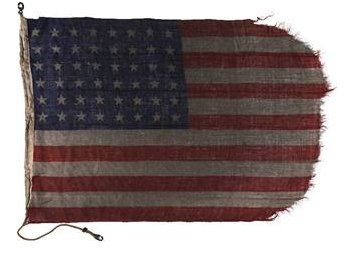 The auction’s most coveted items included a collection of weapons, a group that was led by a Henry Lever Action Rifle. The .44 rimfire-caliber weapon, with its octagonal barrel, smooth walnut stock, fixed front sight and adjustable rear ladder sight, was the subject of fierce bidding that drove its return up to $25,000.

A 12-gauge Cased & Engraved J. Purdey & Sons Double-Barrel Shotgun pulled in $16,250, while a Napoleaonic Period British Officer’s Saber was snatched up for $12,500. Fetching $10,000 was a Remington Dog’s Head Rifle Cane. The .32-caliber rimfire weapon includes a nickel-silver joint between the dog’s head and the shaft, and a barrel stopper that might be original to the cane, which Remington advertised as “just the thing for taxidermists [and] … protection against dogs and highway men.” A Cased Browning Supernosed Exhibition Grade D5G Engraved Boxlock Over and Under Shotgun realized $9,375. This 12-gauge firearm features a Louis XVI D5G scroll and floral engraving to coin-finished receiver, signed by Claude Baerton, a finely checkered walnut pistolgrip stock and fore-end, and a checkered buttplate.

The auction also featured a wide array of items other than flags and weapons that were in high demand by collectors.

A Battle of Bunker Hill: Silver Medal for Gallantry from King George III to Captain Peter Ewing of the Royal Marines, circa June 17, 1775, ended up at $16,250, while a set of Eight Bound Volumes of Harper’s Weekly gleaned $10,625 – more than doubling its pre-auction estimate.

A Confederate General’s Collar Insignia of Tomas Lafayette Rosser, with three heavy gold bullion embroidered stars surrounded by a wreath of leaves and acorns, on a buff wool background, realized $8,125. That was the same price brought in by a 17th Century-Style Etched Suit of Armor with an etched, closed helmet, with finely detailed pierced, fluted and etched elements.