Neil Armstrong’s personally-owned gold medal, flown to the moon with him on his historic Apollo 11 landing, sold for $2,055,000 on Tuesday, July 16, at a public auction of rare space memorabilia at Heritage Auctions in Dallas.

The solid gold Robbins Medal was a cherished keepsake and the highlight of the beginning of a three-day auction event, which includes Part III of The Armstrong Family Collection™. Even the moonwalker’s well-loved childhood teddy bear sold for $3,500. 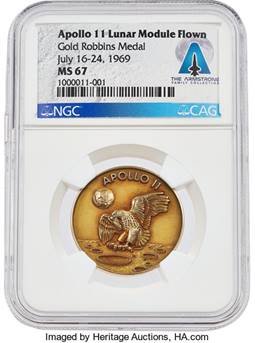 “The response from admirers of Mission Commander Armstrong’s contribution to humanity has been simply overwhelming,” said Michael Riley, Director of Space Exploration at Heritage Auctions.

Two national treasures Armstrong carried with him to the moon sparked competitive bidding as collectors bid $143,750 for a 1-1/4-inch swath of muslin cloth from the left wing of the Wright Brothers’ 1903 Flyer and a section of the flyer’s propellerended at $150,000.

His personal copy of NASA’s “Preliminary Apollo 11 Flight Plan,” dated April 24, 1969, and featuring a fascinating, 134-page timeline of crew activities, planned minute by minute for a successful mission, sold for $112,500. His personally owned and worn early Apollo-era flight suit, an ultra-rare piece of early spaceflight memorabilia and one of just a few known to exist, ended at $81,250.

A never-before-seen, internal NASA memo regarding whether to coach Armstrong on what to say during his descent to the lunar surface finally gives the public an understanding of how important the moment would be for humanity. The memo comes from NASA’s Assistant Administrator for Public Affairs Julian Sheer, who writes that the space agency should not coach the astronauts because “… the truest emotion at the historic moment is what the explorer feels within himself …” Bidders pushed the sale price to $30,000.

A sleeper lot, a section of camera film leader strip flown aboard the Apollo 11 Lunar Module and used on the surface of the moon sold for $26,250 against a $3,000 pre-auction estimate.

A unique item fit for museum display, Armstrong’s personal copy of the July 25, 1969 issue of LIFE Magazine sold for $21,250. The magazine still retained his original mailing address, affixed below the cover photo of himself walking to the launch pad under the blaring headline: “Leaving For The Moon.”

Armstrong’s personal collection even included a piece of the Apollo 11 spacecraft itself. A 1-1/4-inch by 1-inch Ablative Plug, used in the craft’s heat shield, sold for $11,875.