“The Shot,” it’s called – that and nothing more.  “Of all the famous buckets Michael Jordan sank,” Sports Illustrated recently noted, “only one of them is iconic enough to be known simply as ‘The Shot.’”  It happened on May 7, 1989. In the deciding Game 5 of the Eastern Conference playoffs. With barely two seconds left on the tick-tick-ticking game clock. And the Chicago Bulls down by one to the Cleveland Cavaliers, who had bested the Bulls in each of their six contests that season.

Jordan was then 26 years old, a rising star without a title to his name. Even that season would end in disappointment, with the Detroit Pistons banishing the Bulls from the playoffs (and Chicago’s first conference finals in 14 years). But even in defeat, that moment when Jordan sank that buzzer-beating jumper over the outstretched arm of the Cavs’ dinged-up Craig Ehlo lives forever. 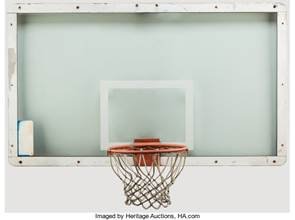 Because of what it heralded, and what it said about the man who would become The Greatest of All Time.

Essays have been written about this moment. Documentaries, too, including ESPN’s record-setting The Last Dance, have focused on this highlight – “one of the best three seconds in Bulls franchise history,” The Jordan Rules author Sam Smith recently wrote on NBA.com.

The Bulls took the series – 101-100 the final score of the final game. But it’s not just The Shot that lingers in the memory. It was Jordan’s reaction afterward – the iconic leap, the shouting in a dead-silent arena, the wild swinging fists. A moment of catharsis for the young man told too many times in his burgeoning career he would never win The Big One. Moments after the ball fell through the net, Jordan would call it “my most memorable shot ever.” It still is, all those titles and myths and documentaries later.

And now, the only tangible keepsake from that moment hits the auction block: the very basket in which Jordan sank The Shot.

This is the rim and the backboard from the so-called Palace on the Prairie, the late Richfield Coliseum that once stood between Cleveland and Akron, and the stanchion upon which they were perched. The piece, which will sell on May 24 in Heritage Auctions’ Sunday Sports Collectibles Weekly Online Auction, has everything the winner needs to re-enact The Shot again and again, ad infinitum.

“The game-winning buzzer-beater is the fantasy of every kid who ever heaved a ball at a playground hoop, and this was the ultimate buzzer-beater from the ultimate player,” said Sports Consignment Director Chris Nerat, based in Heritage Auctions’ Chicago office. “This is one of those singular moments that stands so tall in sports history you need not be a fan to know its significance, basketball’s version of Willie Mays’ ‘The Catch.’ The basket – the unheralded but essential co-star of Jordan’s career highlight reel – carries such massive and undeniable appeal.”

The winning bidder actually gets the pair of baskets in play at the Coliseum that night – the one from the north side of the court, where Jordan hit that buzzer-beater, and its twin from the south side.

Both were rescued by a Cleveland-area property developer named Daniel Dzina, who, in the 1990s, approached Cavs ownership about demolishing the structure and keeping its contents. Before it was razed by the National Park Service, Dzina bought both baskets used during the Cavs’ 20-season run in the facility.

Dzina eventually gifted the baskets to our consignor, who installed them on the court outside a home in suburban Cleveland, where they remained for two decades. As such, the baskets show limited, acceptable exposure to the elements. But it’s not as though Mother Nature could wash off their legend.

The owner eventually wanted to determine which of the pair was the basket immortalized by The Shot, and a bit of digging revealed the moment had taken place at the north end of the Coliseum. Fortuitously, the baskets were already marked with their locations. The basket has been extensively studied, and an examination of game film finds not a single deviation, save for the loss of the protective padding at the lower edges and the inevitable fading of the NBA logo sticker at lower left.

“This offering,” said Chris Ivy, Heritage Auctions’ Sports Auctions Director, “is a once-in-a lifetime shot for one of our bidders to own an iconic piece of sports history.”

The baskets come with a letter of provenance from Daniel Dzina, as well as a letter of authenticity from Heritage Auctions.

The winner will have to provide their own iconic moment.