The current One of a Kind Collectibles Auction offers Rare Autograph & Document at Auction, is in progress and ends September 29, 2022. Includes 230+ lots of rare autographs & documents , including items from categories of Presidential, Judicial, Military, American Revolutionary War, Art & Literature, Aviation & Explorers, Science, Music, Entertainment and Sports, plus much more!  There is something for all kinds of collectors. Bid, view and register for the auction at oakauctions.com .  Bidding concludes September 29, 2022.

Presidential pieces from a Rare James Garfield Appointment as President, Abraham Lincoln Appointment, John Adams DS, Andrew Johnson, John Kennedy, Madison, and Taylor to name a few. You will also find a Rare Harry Truman Ledger book from when he was in charge of an Auto Club and even a rare 4-page letter from Hoover as a Mining expert in China! Some Historical include Baron Von Steuben, and Henry Knox. Authors represented by a rare Katherine Lee Bates signed “America the Beautiful,  Samuel L. Clemens, Virginia Woolf.  Aviation, with Earhart, Apollo 11 signed photos. Sports has an incredible 1939 Babe Ruth Signed FDC, and even a Ted William Signed bat.  Entertainment & Music to Audrey & Katherine Hepburn, Garbo, Charles Chaplin worn scarf and much more!

*Auction is scheduled to close on September 29, 2022 initial bid MUST be in by 8 pm EST to be allowed in extended bidding* 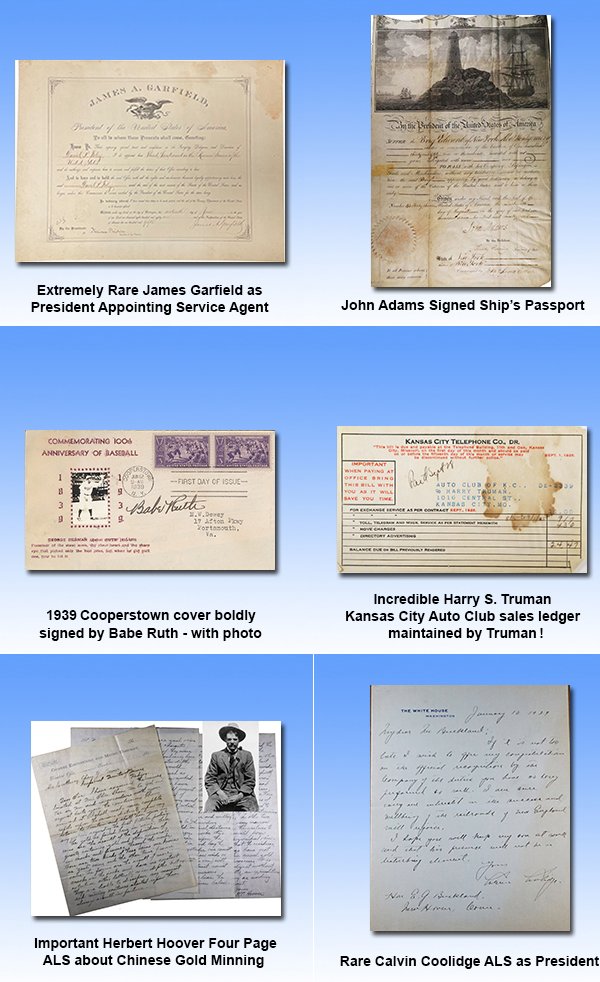