In the world of sports memorabilia, there are rare artifacts that are considered unique, and then there are true one-of-a-kind items that can never be replicated. In the Goldin Auctions 2014 Opening Day Auction, one fortunate collector will have the chance to own a one-of-a-kind 2002 Aston Martin Vanquish sports car produced exclusively for the Naismith Memorial Basketball Hall of Fame 50th anniversary celebration. As an added bonus, the rare automobile is autographed by 50 basketball Hall of Famers including; Michael Jordan, Charles Barkley, David Robinson, Moses Malone, John Havlicek and many others.

This 2002 Vanquish is in pristine condition with just over 5,000 miles on the odometer. It was created by Aston Martin exclusively for the Naismith Memorial Basketball Hall of Fame’s Official 50th Anniversary celebration. The car was custom wrapped with an NBA “Hardwood” vinyl wrapping and includes numerous exclusive features.

To top it off, the car is signed by 50 basketball legends including; Jordan, Walt Bellamy, Robinson, Dave Cowens, George Gervin, Sam Jones, Rick Barry, Bob Kurland, Bob Lanier, Malone, Bailey Howell, Calvin Murphy, Nancy Lieberman, Harry Gallatin, Ann Meyers, Barkley, John Stockton, David Thompson, Dolph Schayes, Havlicek among others. On the sides of the car is a basketball with the ESPN insignia, and the hood features the Children’s Safety Network logo and “50th Anniversary Hall of Fame.” The consignor bought the car directly from the Children’s Safety Network as a charitable purchase.

The 2002 Aston Martin Vanquish is a two-door luxury coupe featuring a 460 HP, 5.9-litre V12 engine with a 6-speed overdrive enabled transmission. The Vanquish was the “James Bond car” in the Pierce Brosnan movie “Die Another Day.” This offered vehicle has been appraised at $1.25 million by the Classic Auto Appraisers out of Irvine, CA. — the official appraisal company for Barrett-Jackson Auction Company. Click here for a copy of the appraisal. Every part of the interior is in excellent condition, while the exterior is mostly excellent including body, paint, trim, bumpers, wheels and the top. Some light wear is apparent on the wheels and underside, grading out as Very Good in their report.

“Every piece of sports memorabilia we come across is special to someone in some way, but there something extra special when we get the opportunity to offer for auction such a rare and unique one-of-a-kind items as the Basketball Hall of Fame Aston Martin,” explained Ken Goldin, Founder of Goldin Auctions. “We have no doubt that this will be a highly desirable item for a collector of rare automobiles, NBA memorabilia, a sports-themed retail location or a museum.” 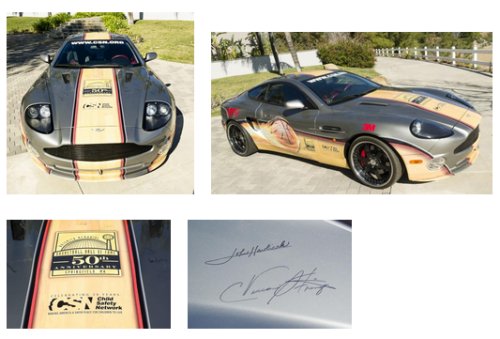