Joining the All-Star Game tickets in the auction lineup will be the 2017 Aaron Judge Mother’s Day Game Worn New York Yankees Jersey (est. $20,000+). The pinstriped jersey trades its navy blue identifiers for hot pink: the classic “NY” and a breast cancer awareness ribbon over the heart giving way to the double-nines on verso. The offered jersey was worn for the Mother’s Day contest at Yankee Stadium, a particularly historic day in the Bronx that saw the last single-digit jersey — Derek Jeter’s number “2” – retired from the team wardrobe. 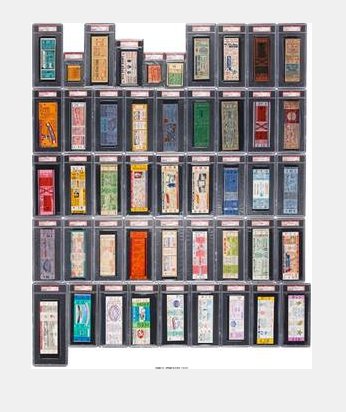 “One of the great benefits of the All-Star Game has always been to introduce the global baseball audience to players they might never have otherwise had a chance to watch,” Heritage Sports Auctions Director Chris Ivy said. “It’s safe to say that this year saw Aaron Judge make the transition from the toast of New York City to the face of the sport.”

These All-Star Game tickets could be destined for a pricing surge similar to that which has propelled low-population trading cards into the stratosphere. The complete run in the PSA Set Registry is comprised of tickets for 83 years of All-Star Game history, as well as all Home Run Derby and workout events from recent years, and the double games of years 1959 through 1962 are present to bring the grand total of tickets offered to 137. The earliest editions are the greatest challenge to ticket collectors, with several existing in populations no larger than five. The full ticket example of the 1933 inaugural edition is one of the hobby’s true Holy Grails, though the untorn 1935 is rarer still. The 1940 Sportsman’s Park full ticket is one of just three that exists, and, at VG 3, the finest known. Years 1942 and 1943 are likewise population one, none finer.