The Detroit Institute of Arts boasts of possessing “the largest and most significant art collections in the United States,” with more than 65,000 works dating “from the earliest civilizations to the present.”

For six months in 2018, that included Rochester, Mich., attorney E. Powell Miller’s collection of baseball cards – specifically, his complete gathering of T206 cards sold in tobacco packs from 1909 until 1911. The Miller collection served as the centerpiece of what The Detroit News called a “jubilant exhibit” tied to the 50th anniversary of the Detroit Tigers’ World Series win over the St. Louis Cardinals. 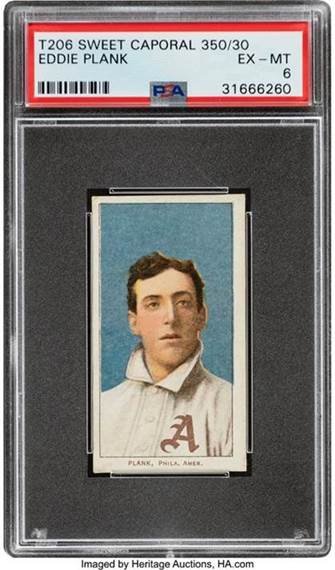 The exhibit was so popular it made an encore appearance at the DIA last summer. And now, almost the entirety of the collection Professional Sports Authenticator once deemed the third-best of its kind is for sale through Dallas-based Heritage Auctions.

Bidding has begun on the Powell Miller 1909-11 T206 PSA Set Registry Catalog Auction, with collectors quite eager to own a piece of the acclaimed assemblage.

“I felt I climbed the mountain by having the entire set displayed for two summers at the DIA, and it was just time to take on new challenges in the hobby and otherwise,” says Miller, who began collecting the T206s around 2000. “I felt like it has been a labor of live for 20 years. I loved putting it together card by card and having it in a prestigious museum – where they took down two original Monets to display the cards.”

The Plank card, featuring one of the greatest lefties ever to hurl a ball at a batter, is indicative of the passion and care Miller invested in his collection.

The card is already legendarily rare; hence its pre-auction estimate. There abound countless theories concerning its scarcity, among them: The A’s southpaw deplored tobacco, and the printing plate used to make the card broke during production. But Miller’s offering transcends even that shortage: There are just two known cards graded higher, and his is but one of 15 known examples to note on the back that it’s “Factory No. 30” in the 350-subject set.

When Miller first displayed his cards at the DIA, the Plank card was the first one PSA asked him about.

“I got my first Plank card, which was graded a [PSA EX] 5, from a great friend who is a collector and lives in Atlanta,” Miller told the grading service in 2018. “Then, a while later, I did a private deal with an auction house and upgraded it to a [PSA EX-MT] 6. That was very special. To get the Plank card in a 6 is a big deal.”

Bidding is already heated, too, for the 1909-11 T206 Piedmont 150 Cy Young graded PSA NM-MT 8 and estimated to sell for more than $100,000. No wonder demand is high: The portrait card is one of a dozen known in this condition among all the brands that were offering cards near the turn of the century, with only one Piedmont 150 Series “Factory No. 25” issue confirmed higher (at 8.5). As our online catalog notes, this Cy Young is “as visually satisfying as one could hope for and a worthy showpiece of the famed 511-game winner.”

Of course, Miller the completist has both Piedmonts featuring The Georgia Peach’s portrait – the one in green and the other in red. Both are exceptionally scarce: The green background offering, which is “Factory No. 25” out of 350 subjects in that particular run, is the lone card in that grade from this brand and series, with only one higher. Hence its $50,000-and-higher pre-auction estimate.

Miller’s red Ty Cobb from this brand and series, estimated at $30,000 and higher, is even harder to find: PSA has graded almost 1,200 versions of the T206 Cobb, and there are fewer than 100 confirmed with this brand-series-factory combination. And this red Piedmont, of three graded NM, is the best of the best. There are none graded better.

The attorney had never planned to part with his PSA Set Registry assemblage. But after the two DIA showings, he received offers he simply couldn’t refuse for the iconic Honus Wagner T206 and Joe Doyle error cards. At that point, Miller says, “I figured I might as well sell my registry set,” while holding on to his mid-grade set still on display in his law office.

There are 522 cards for sale in this very special event, every single one as magnificent and sought-after as the next – from the Sweet Caporal Vic Willis (With Bat), at PSA Mint 9 the only one of its kind and the highest graded, to the Piedmont 350-460/25 George Mullin (With Bat), the lone card of its kind graded PSA NM 7 (MK).

“It’s hard” parting with this T206 set, Miller says. “I am going to miss these cards. But I am proud many of my cards are the best versions of those cards in the entire world. It will be a long time coming when there is another opportunity to get so many one-of-ones because I spent 20 years collecting these.”