Goodwin & Company Masterpieces and Uncommon Commons XLIX is open for bidding and concludes on June 5th. You will find the seldom seen or, perhaps, never seen before cards of some of baseball’s greatest legends in this catalog. A few examples are an 1886 Welton Cigar card of Buck Ewing, a 1938 Chicago Cubs World Series ring and a 1917 Boston Store Joe Jackson. We are proud to offer complete sets of E93 Standard Caramel with cards grading as high as PSA 8, an outstanding 1934 Goudey set and an E103 Williams Caramel set. Over 900 lots up for bid. Register and bid now at goodwinanco.com. 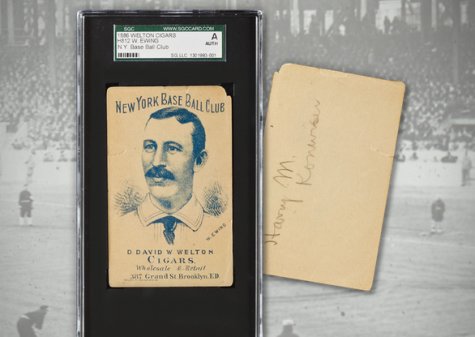 Topps and Bowman aficionados will discover mint PSA graded examples of Musial, Mantle, Williams, Banks and Brooks Robinson to name a few. We feel that there is something for everyone in this catalog and sincerely hope that you enjoy the auction.