Love of the Game Auctions Spring, 2015 auction is now live, and open for bidding! We invite you to visit our website and take a look at the fantastic selection of cards and memorabilia that we are featuring in this sale. Bid, view and register for the auction at loveofthegameauctions.com. The auction ends March 28th.

The sale features sports and non-sports cards and memorabilia from the late 19th Century to the present, highlighted by an incredibly rare collection of Joseph Hall cabinets.  Each of the SGC-graded cabinets, published in 1888, are thought to be unique, and feature four Hall of Famers: Roger Connor, Jim O’Rourke, John Ward, and Mickey Welch.

Also featured is a spectacular Oscar Charleston signed ledger sheet (JSA).  Charleston, ranked by Bill James as the fourth best baseball player of all time, managed the 1950 Philadelphia Stars, and in that capacity, he signed this ledger sheet when collecting gate receipts after a game with the Birmingham Black Barons.  Charleston signatures are among the most rare of all baseball Hall of Famers, with only 20 or so thought to exist.

“This is a truly unique auction,” said Auction Director Al Crisafulli.  “It’s filled with rare and valuable material, whether it be tough 19th Century cards and memorabilia, high-end football cards, or hard-to-find Negro Leagues items, we think the auction will be interesting to collectors because it’s got a lot of things they may never have seen before.”

While the auction has an excellent blend of cards and quality memorabilia, some of the most impressive highlights are its high-grade football cards.

“The football selection in this auction is outstanding,” said Crisafulli.  “We’ve got a beautiful group of PSA-graded Hall of Fame rookie cards, and some of the most desirable football cards in the entire hobby.”

The football selection includes a very rare 1952 Bowman Large Jim Lansford,  graded NM-MT 8 by PSA.  The Lansford is one of just a handful of this grade known, with no NM-MT 8 examples having sold publicly in years.

Among the other football Hall of Fame rookies include a fine selection of 1948 Leaf, including Chuck Bednarik, a group of early Bowmans, include the rookie cards of Emlen Tunnell and George Blanda, and PSA 8 rookie cards of Don Hutson, Lance Alworth, Ray Nitschke, and many more.

One of the most coveted of all prewar baseball subjects is Honus Wagner, and the Spring LOTG auction does not disappoint.  The auction includes a number of rare photos and postcards that originate from the Wagner estate, including a gorgeous cabinet photo featuring the “Old Guard” of Wagner with Fred Clarke and Tommy Leach, a beautiful and rare example of Wagner’s wedding photo, and an incredible real photo postcard of Wagner horsing around on the ballfield during spring training in what we believe to be 1910.

Also featured is a rare W600 Sporting Life Cabinet of Wagner, an incredible 1911 E94 George Close Candy Wagner with the “Blomes Chocolates” overprint, and, for the autograph collector, a Wagner-signed personal check dating to 1918.

Prewar cards of Caribbean and Negro League players are also in abundance, highlighted by a rare real photo postcard depicting Hall of Famer Jose Mendez in his street clothes, one of the oldest known images of the famous Kansas City Monarchs pitcher. 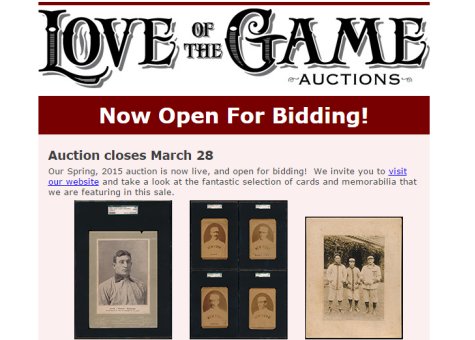 The auction also includes a spectacular 1924 Aguilitas Cigars card of Oscar Charleston, a rare 1950-51 Denia Puerto Rican card of Hall of Famer Willard Brown, and as a change of pace, an incredibly rare 1924 Diaz Cigarettes card of Walter Johnson – one of only two graded examples from this extraordinary set.

Complete, PSA-Graded sets are also represented, highlighted by the #3 1959 F373 Rinso “Paladin” set on the PSA Registry.  This set features the character “Paladin” from the “Have Gun – Will Travel” television show, which aired on CBS between 1957 and 1963.  The cards, which were inserted into packages of Rinso Soap Powder, have a cumulative GPA of 6.77.

Also included is a fantastic 1941 Double Play complete set, #7 on the PSA Set Registry.  This difficult set is just one of six complete sets on the registry, with no card graded below VG-EX 4 and the overwhelming majority graded EX-MT 6 or better.

A boutique auction, the sale is specially curated to cater to the advanced collector, with the clear images and detailed, informative lot descriptions that have become a hallmark of the company.  Specific auction highlights include:

One of the auction’s key highlights is a 1952 Topps Mickey Mantle, graded AUTHENTIC by PSA.  Though the card has received its grade due to a slight trim, it is one of the most attractive Mantles we’ve seen, with beautiful color and gloss, strong centering, and very little surface wear.

A large collection of 1909 E90-1 American Caramel cards graded by PSA is highlighted by the super-rare Mike Mitchell (Cincinnati) card, considered to be the most rare in the set, and often referred to as the “Honus Wagner of Caramel Cards.”  The group includes plenty of other rarities and Hall of Famers from the set as well.

Of course, no Love of the Game auction would be complete without a large selection from the popular T206 set, and this is no exception.  A full range of Hall of Famers is highlighted by a rare, Hindu Cigarettes-backed Johnny Evers card, one of just one at its level with only two higher.  Rare T206 backs are well-represented, including the only known Drum-backed example of Dan Moeller, one of only two confirmed Broadleaf-backed Bill Lattimores, and a host of tougher Hindu, Cycle 460, Sovereign 460 and American Beauty backs.

Outstanding Memorabilia:  A key highlight of the Spring auction is a rare and beautiful 1895 Cleveland Spiders advertising broadside, with Cy Young, Jesse Burkett and Patsy Tebeau.  The rare advertising piece was produced to promote an exhibition game between the Spiders and the Chambersburg Maroons, an amateur team that still plays today, in historic Henninger Park in Chambersburg, PA.  The park was named after “Pop” Henninger, the man who produced this very broadside!

Also offered is a stunning 1881 Boston Baseball Stock Certificate with multiple signatures.  Though a handful of similar certificates have been sold at auction in recent years, this one is of particular historical importance, having been issued to J.B. Billings – the Boston treasurer and man responsible for purchasing Hall of Famer Mike “King” Kelly for $10,000!  The certificate and its receipts have been signed by Billings and team president Arthur Soden, the man credited with inventing baseball’s much heralded (and derided) reserve clause.

Hall of Fame Autographs: Of course, autographs are also well-represented in the sale, beginning with an attractive Babe Ruth cut signature, authenticated by PSA/DNA.  The sale also contains signatures from a number of other tough-to-find Hall of Famers, including Chief Bender, Billy Southworth, Bill McGowan, Tony Lazzeri, and many more.

The auction contains a unique assortment of signed postcards, assembled by a dedicated TTM collector in the late 1940s.  Each of the postcards, which were signed by active players like Stan Musial, Pee Wee Reese, and Luke Appling, were postmarked and mailed, their cities and dates of origin coinciding with their team’s game schedule during the season.  Also included in the collection are fascinating signatures from retired players like Fred Tenney and Duffy Lewis.

Of course this is just a sampling of more than 600 quality lots offered in the auction.  The company invites collectors to view and register to bid online.

The final date to bid in this auction is Saturday, March 28.  Catalogs will mail to all active bidders on March 10, and can be mailed out by request..  To register for the auction and review the selection online, visit http://www.loveofthegameauctions.com.

Love of the Game is in the process of assembling its Summer, 2015 catalog auction, which will prove to be its biggest and most exciting auction yet.  For more information, or to consign your valuable material, contact Love of the Game at info@loveofthegameauctions.com or (973) 452-9147.