Love of the Game Auctions presents our biggest and best auction yet.  1,260 lots of quality sports artifacts, including more than 100 lots of vintage memorabilia, 800 lots of quality cards, over a dozen high-end game-used bats and over 100 beautiful autographed lots.  Bid, register and view the items now through January 30th at loveofthegameauctions.com.

The auction closing date is Saturday, January 30.  The sale features sports and non-sports cards and memorabilia from the late 19th Century to the present, highlighted by the amazing 1930 Boston Post Old-Timer’s Day Multi-Signed Poster.  The poster was created by participants in the 1930 event, to be given to former Red Sox catcher Lou Criger, who was unable to attend the game due to illness.  The hand-lettered poster, measuring 20” x 29”, offers well-wishes to Criger, and was signed by 49 deadball era figures, including Honus Wagner, Ty Cobb, Cy Young, Ed Walsh, “Nuf Ced” McGreevy, Johnny Evers, and more. 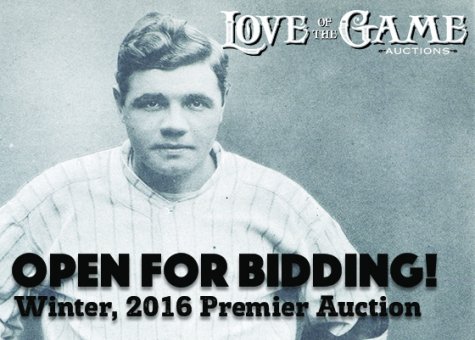 The poster, along with other memorabilia from the game, were presented to Criger in 1930 by broadcaster Fred Hoey (who also signed the poster).  It has remained in Criger’s family until now.  Players from the game received replicas of the piece, some of which have filtered into the hobby, but this auction is the first time the original has ever been seen.

“The piece is an incredible discovery,” said Auction Director Al Crisafulli.  “The condition is amazing, and it is huge, so most of the signatures are about three inches long, clear as a bell and include many rarities, like Jimmy Collins and ‘Nuf Ced’ McGreevy.”

Another auction highlight is a 1929 Lou Gehrig Game-Used Bat.  The bat, a beautiful Hanna Batrite, is another newly-discovered bat that was discovered in an antique store several decades ago.  A beautiful specimen, the bat has been examined by PSA/DNA and assigned a grade of GU 7.  An incredible rarity, roughly 20 Gehrig game-used bats are known.  This is the second Gehrig bat to be sold by Love of the Game, both of which were new hobby discoveries.

“The consignor of the bat read about the Lou Gehrig bat that sold in our last auction for $437,000,” explained Crisafulli.  “You would imagine that after a sale like that, the phone here was ringing off the hook with people who claimed to have valuable bats.  Of course most of them turned out to be store-model bats – but you can imagine my astonishment when the consignor handed us this one, and it was obviously authentic.”

Another important bat in the auction is an incredible Roy Campanella 1952 All-Star bat. One of just two such bats made for the heroic Brooklyn catcher, it is a beautiful bat that has been graded PSA/DNA GU 9.  Campanella had just two at bats in the game (a walk and a popout), which was rained out after 5 innings.  The beautiful club was made for Campy at the peak of his career.

“We’re thrilled with the selection in this auction,” continued Crisafulli.  “It’s our largest auction ever.  Even though it’s highlighted by more than 800 lots of rare and valuable baseball cards, we’ve also got over 100 lots of vintage baseball memorabilia, and nearly 100 lots of baseball postcards.  We have more than a dozen high-end game-used bats.  Best of all, we’ve got over 100 lots of autographed items, and every single one of them displays just beautifully.  I couldn’t be happier with this auction, and I think our bidders will feel the same.”

A boutique auction, the sale is specially curated to cater to the advanced collector, with the clear images and detailed, informative lot descriptions that have become a hallmark of the company.  Specific auction highlights include:

Game-Used Bats:  In addition to the Gehrig and Campanella bats mentioned above, the auction features a large assortment of high-end Hall of Fame bats.  One of the highlights is a beautiful 1928-29 Jimmie Foxx Game-Used Hanna bat.  The 35-oz. bat exhibits evidence of heavy use, with many cleat impressions and a handle crack that has been repaired with nails.  Graded PSA/DNA GU 5, the bat is a gorgeous piece of lumber, one of three incredible Hanna bats in this auction.

Another tremendous bat is a gorgeous 1965-68 Louisville Slugger used by the great Willie Mays.  The bat exhibits excellent signs of use, and has been graded GU 8.5 by PSA/DNA.

Two other interesting Hall of Fame bats include very early Louisville Sluggers used by Gary Carter (PSA/DNA GU 8) and Ozzie Smith (PSA/DNA GU 8).  The Carter bat dates to 1973, just before he broke into the majors, and appears to have been used both with his AAA and major-league teams.  The Ozzie bat is a 1978-79 model, a rookie-era bat from the popular Padres and Cardinals infielder.

Rare Baseball Cards: The auction includes our largest-ever assortment of 19th Century cards, highlighted by a group of six 1887 N173 Old Judge cabinets, including three with rare brown mounts.  The brown mounts include the highly desirable California Brown, along with Tom Deasley and Fred Pfeffer.

Another important rarity is a beautiful 1921 Pathe Freres Babe Ruth (with accompanying record and print ad), a card given away by a French record company as a premium to people who bought the record “Babe Ruth’s Home Run Story.”

Vintage Baseball Memorabilia: The company’s largest-ever memorabilia section includes the highest-graded 1941 Lou Gehrig Memorial ticket (graded PSA NM-MT 8).  The ticket is the only example to attain a grade even remotely this high, with the next-highest unqualified grade being a PSA 5, which sold for $17,000 in 2011.

Tickets are well-represented in the auction, including a complete set of 1980 Olympic Hockey “Miracle On Ice” PSA-graded tickets, a pair of attractive ticket stubs to Jackie Robinson’s final game (which happened to also be Game 7 of the 1956 World Series), a beautiful full ticket to Red Grange’s final college football game on November 21, 1925, and a full ticket to the “Game of the Century” – the 1946 Army-Notre Dame game at Yankee Stadium.

Beautiful Autographs: The company’s largest and most beautiful autograph section is highlighted by a series of four player endorsements for the Bradley Sweater company.  In 1923 and 24, the textile company exchanged free sweaters for entire pro ballclubs, in exchange for their manager’s endorsement.  The auction features the endorsements from Ty Cobb, George Sisler, Bill Killifer and Art Fletcher.  Each of the signatures were carefully reproduced for the company’s famous print ads.

The sale also features a host of single-signed bats, vintage baseball cards and postcards, photos, and handwritten letters, including a spectacular one from Honus Wagner.

The final date to bid in this auction is Saturday, January 30.  To register for the auction and review the selection online, visit http://www.loveofthegameauctions.com.

Love of the Game is in the process of assembling its Spring, 2016 catalog auction, which they hope will prove to be its biggest and most exciting auction yet.  For more information, or to consign your valuable material, contact Love of the Game at info@loveofthegameauctions.com or (973) 452-9147.

About Love of the Game Auctions
Love of the Game Auctions is an internet sports auction house catering to thepassionate collector of memorabilia and cards, brought to you by longtime hobbyist Al Crisafulli.  A collector for more than 30 years, Crisafulli’s successful track record in business led him to found an advertising and marketing agency in early 2004, where he combined his business acumen with his passion for the hobby, enlisting several hobby-related companies as advertising clients.  During this time he was responsible for providing marketing strategy, business consultation and overall strategic direction to auction houses, grading and authentication companies, and card dealers.