“We are excited to host a live auction in New York City for the first time ever and especially proud to hold it at NYY Steakhouse.” said Ken Goldin, Founder of Goldin Auctions. “It is not surprising that the bidding has been frantic over the past month since many of the most sought after items are from New York area athletes and others are being offered for auctions for the first time. We expect an electric atmosphere on Saturday night.”

Some of the highlights of the live auction, which will be simulcast online beginning at 7:00 pm ET at GoldinAuctions.com include: the 1921 contract signed by all MLB owners establishing the Office of Commissioner; Babe Ruth’s first Yankees signed playing contract; the only Ruth glove ever authenticated; game-used bats from Ruth, Ty Cobb, Honus Wagner and Mickey Mantle; a Larry Bird game-used and photo matched jersey from one of his greatest games; a 1952 Mickey Mantle PSA 7 and much more. 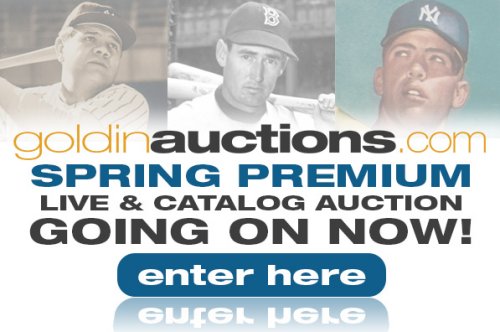 Recent auction sale of the “Laws of Base Ball: for $3.26 reinforces collectability of historic baseball documents

“The sale this weekend of the original “Laws of Base Ball” for $3.26 million plus many other recent baseball document sales, indicates that the demand for museum-quality historic baseball documents is as healthy as it’s ever been,” said Ken Goldin, Founder of Goldin Auctions.   “From Judge Landis and Bowie Kuhn to Bart Giamatti and Bud Selig, the commissioner of baseball has been at the center of every important baseball controversy for nearly 100 years. This is the document that started it all.”
The 9″ x 13″ agreement exhibits three horizontal folds as well as a pair of minor, two-inch tears (bringing about no paper loss) along the edge of the first page. The neatly arrayed signatures are vividly black-inked exemplars, faulted only by traces of smudging in the penmanship of Stoneham. LOA from PSA/DNA (AA05657). The signers include legendary baseball figures: Harry Frazee; Jacob Ruppert, Charles Comiskey, Clark Griffith, Charles Stoneham, William Veeck Sr, Ban Johnson, Charles Ebbets and many more. Among the highlights of the document is the $50,000 annual salary and seven-year renewable term, and the stipulation that the agreement would remain in force for a period of 25 years. 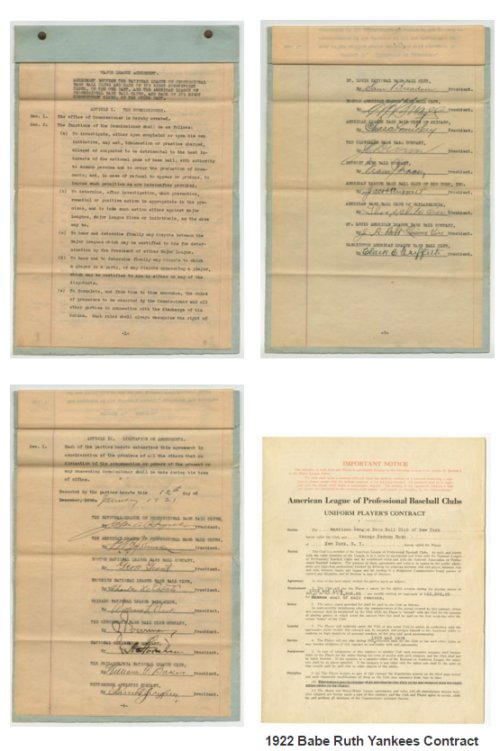 Late in the summer of 1920, MLB found itself embroiled in the Black Sox scandal — a controversy that threatened the integrity of the sport. That fall, as the players prepared to defend themselves in court, the team owners formed a three-member “Board of Control” that would have the power to oversee and govern baseball. The Board would consist of each League President and a Chairman whose integrity was both impeccable and above reproach — Kenesaw Mountain Landis. On November 12, 1920, the owners met with Landis in his chambers, outlined their plan, and offered him the position of Chairman.
Presented here is the actual legal agreement signed on January 12, 1921 that established the office of Commissioner in Major League Baseball. The seven-page, typewritten agreement, carrying the title, “Major League Agreement – Agreement between the National League of Professional Base Ball Clubs and each of its eight constituent clubs, of the one part, and the American League of Professional Base Ball Clubs, and each of its eight constituent clubs, of the other part.” It is signed by each respective League President and all 16 club owners (or their official representatives). The eighteen black ink signatures appearing on the document are some of the most famous men in baseball history; John Heydler (National League President), Ban Johnson (American League President), George Grant (Boston Braves), Charles Ebbets (Brooklyn), William Veeck, Sr. (Chicago Cubs), August Herrmann (Cincinnati), Charles Stoneham (New York Giants), William Baker (Philadelphia Phillies),Barney Dreyfuss(Pittsburgh), Sam Breadon (St. Louis Cardinals), Harry Frazee (Boston Red Sox), Charles Comiskey(Chicago White Sox), James Dunn (Cleveland), Frank Navin (Detroit), Jacob Ruppert(New York Yankees), Thomas Shibe (Vice President, Philadelphia A’s), J.A. Robt-Quinn (Vice President, St. Louis Browns) and Clark Griffith(Washington). The signatures are deep, bold and highly legible throughout.
The other historic baseball document being offered fro sale is Ruth’s first Yankees signed playing contract (1922).  It is especially historic as it covers the 1923 championship season and was the largest contact in baseball history by a wide margin – three years for $52,000 annually – with two additional option years.   The contract also included a special clause for the well-known carouser — “the player …refrain entirely from the use of intoxicating liquors and that he shall not during the training and playing season in each year stay up later than 1 o’clock A.M. on any day with the permission and consent of the club’s manager. Goldin Auctions previously sold his final Red Sox contract (1918) for a record $1.02 million.

Here’s a more detailed look at some of the most unique items being offered in the live auction. Current bids as of April 27 at Noon ET in parentheses.

Lot #29 – Babe Ruth Circa 1912 St. Mary’s era Used Right Handed Catcher’s Mitt from Babe Ruth Museum – Current Bid ($155,000) -This surviving Babe Ruth used glove is one used by the Babe during his formative years behind the walls of St. Mary’s Industrial School for Boys and the only authenticated Ruth glove. To add to the mystique, the glove was actually a right-handed catcher’s glove, which the southpaw used before becoming a pitcher. Includes LOA’s from PSA/DNA, MEARS, Babe Ruth Museum, and Family Provenance.

Lot #41 – Historic 1921 Document Establishing MLB’s “Office of Commissioner” signed by all of the owners and both league Presidents -18 Signatures (PSA/DNA) – Current Bid ($34,000) – Presented here is the actual legal agreement that established the office of Commissioner in Major League Baseball. It also has a LOA from PSA/DNA (Cert. #AA05657).

Lot #47 – Historic Larry Bird Photo-Matched/Video-Matched Game Used Jersey from May 22, 1988 Playoffs Game 7 – Current Bid ($18,000) – In a game Bird once called this his greatest performance ever, Larry Legend locked horns with Dominique Wilkins, scoring 20 fourth quarter points in the classic game seven showdown won by the Celtics. This size 46+3 Sand Knit jersey, which originated from the collection of a Celtics executive, has been video-matched to two DVDs made by the NBA and comes with a video-match certification by NBA authenticators and THE MEIGRAY GROUP.

About Goldin Auctions
Sports memorabilia impresario Ken Goldin has sold more than $600 million in memorabilia from many of the biggest names in sports, history and pop culture and was the pioneer of using the medium of television to sell sports memorabilia. Over the past few years, Goldin Auctions sold Babe Ruth’s 1918 contract for a record $1.02 million, a Honus Wagner T206 card for a public sale record $2.1 million and the Mike Piazza Post-911 home run jersey for $365,000. Goldin Auctions strives to break new ground and offer collectors the best in collectible treasures up for auction in the marketplace. All game worn or autographed items come with team, player, league or additional LOA from industry leading authenticators; and collectors can bid with confidence that their proxy/ceiling bids remain confidential. For more information, visit www.goldinauctions.com.