Every year, Goldin Auctions sells dozens of pairs of game-worn sneakers and cleats from famous athletes. But this month, the company’s auction will feature a pair of sneakers that were never worn by a professional athlete but are more historic and valuable than all the other shoes combined. An original pair of the Nike Moon Shoes – the most famous pair of running shoes ever made are up for bids in the Goldin Auctions 2019 Holiday Auction. A preview of the auction catalog is currently available for viewing at GoldinAuctions.com. The auction will be open for bidding from Nov. 18 through Dec. 7, 2019.

Nike made several different iterations of the Moon Shoes, but only a limited amount of the original style “Moon Shoes” were ever made. This makes the style very rare and almost impossible to find. Such a rarity is not lost on collectors. In July, one of the original pair sold for $437,500, a record price for sneakers sold at auction. 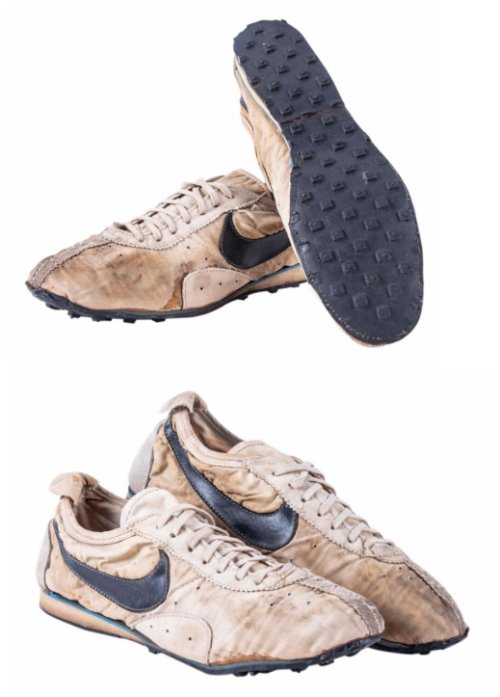 This pair of original Nike Moon Shoes being offered by Goldin Auctions, were obtained by our consignor through legendary Nike Collector Lindy Darrell. They were featured in and pictured in the November 27, 2017 issue of Cincinnati Magazine. A link to the article is https://www.cincinnatimagazine.com/stylescoutblog/style-counsel-lindy-darrell/. There may only be a handful left in existence and these offered shoes are one of those very rare pairs. This pair has no tagging as it was custom-made and is an approximate size between 8 and 9.

The shoes are in remarkable condition given their age and this pair differs from the other original pairs with extra padding in the sole. The sneakers are heavily toned and have the black Nike swoosh on both sides. There are remnants of the glue on the edges used in the construction and the original laces are still fully intact. The left shoe shows more edge wear with minor chipping, but overall these sneakers maintain a strong visible appeal. Also included in this lot is an original early 1970’s singlet yellow jersey made of silk with “OREGON” in green across the chest.

In 1972, Nike was just a small company in its infancy based in Eugene, Oregon the home of the University of Oregon. Co-Founders Phil Knight and Bill Bowerman of Blue Ribbon Sports, the precursor to Nike, had a product to promote – namely the Moon Shoe. Bowerman, the running coach at the University of Oregon and the U.S. Olympic track coach presented the Nike Moon Shoes to five runners at the Olympic Trials. While not all of the shoes were used, they did garner attention for the lightweight feel and waffle sole that gripped better and made imprints similar to those footprints left by the astronauts on the moon during the Apollo missions of the late 1960’s and early 1970’s. Thus, the name Moon Shoe was chosen.