An extraordinary, 12-panel page of Original Tintin Art by Belgian cartoonist Hergé may sell for as much as $720,000 in Heritage Auctions’ first European Comic Art Auction June 2. The sale offers nearly 300 lots, including vintage artworks by giants of Franco-Belgian comics such as Peyo, François Schuiten and Jean-Claude Mezieres.

The auction will be held at Heritage’s headquarters in Dallas, Texas, and simulcast to Heritage Auctions Europe in IJsselstein, the Netherlands. Highlights will be on preview in Paris, Brussels and IJsselstein.

“Our team at Heritage Auctions Europe has procured an offering of exceptional depth and breadth,” said Jim Halperin, Co-founder of Heritage Auctions. “This is just the start of what we expect will be regular auctions devoted to this growing and powerful category.” 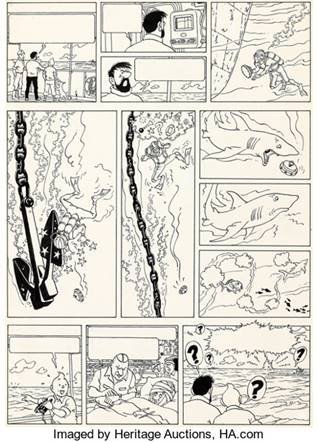 On offer are several pieces of original art by Georges Remi (known by the pen name “Hergé”), who is considered one of the most popular European comic artists of the 20th century. A page of rarely seen pencil art that documents Remi’s creative process accompanies the aforementioned original art for page 58 of the story “The Red Sea Sharks,” from Journal Tintin published in 1958.

Additional artworks by Remi include a full-color, original illustration for Red Rackham’s Treasure: The Crypt of Marlinspike Hall (est. $54,000), featuring Tintin, his trusty pup Snowy and friend Captain Haddock. A related original illustration published on the front page of the newspaper Le Soir (est. $30,000) announces the publication of Red Rackham’s Treasure in 1943. An iconic Original Art Panel from Tintin: The Temple of the Sun, published in 1947, depicts Tintin and Captain Haddock on an adventure in the heart of the Andes (est. $22,000).

From Peyo, the creator of the internationally famous Smurfs, comes the Original Cover Art for Spirou #1447, which is drawn Peyo himself and features 10 characters in a single illustration (est. $48,000).

A page of Original Art from Corto Maltese by legendary Italian comic book creator Hugo Pratt (est. $43,000) is expected to spark spirited bidding. Corto Maltese is perhaps Pratt’s greatest contribution to European comics and the page, from the 1978 story “And Other Romeos and Other Juliets,” is an iconic representation of the artist’s signature black and white illustrations.

An important painting by François Schuiten, titled Paris in the Twentieth Century (est. $36,000), was created by the co-author of The Obscure Cities for the cover of Jules Verne’s “forgotten” novel published in 1994.

The Original Cover Art by Jean-Claude Mézières for Valerian Vol. 19 (Dargaud, 2004) is considered one of the finest examples of Mézières talent, who along with writer Pierre Christin is credited for creating the blueprint for French science fiction comics.

A powerful original painting by Spanish artist Luis Royo titled Isolde and Tristan Circuits (Norma, 2005) (est. $22,000) is a highly sought after illustration which was published in the art book Subversive Beauty.

“Classic American comic art has always been popular throughout Europe and this auction includes stellar examples from many of the legends of comic book and newspaper features, from Will Eisner to George Herrimanand Alex Raymond to Frank Miller,” Halperin said.

Heritage Auctions’ inaugural European Comic Art Auction is June 2 in Dallas, Texas, and will be simulcast to Heritage Auctions Europe Office in IJsselstein, the Netherlands. Bidding is now open at HA.com/7188.