An irregularly large flag flown on Apollo 11 and a painting by one of the 12 astronauts to walk on the moon are expected to compete for top-lot honors in Heritage Auctions’ Space Exploration Auction May 11 in Dallas, Texas.

The Apollo 11 Flown Large Size American Flag on a Crew-Signed Presentation Certificate, Framed (est. $50,000-75,000) is extraordinary, and not just because it is among the limited material that has been to the moon. It also is of unusual size, measuring 8-by-12 inches, mounted to a 9-1/2-by-11-1/2-inch color certificate printed with the words: “This Flag Traveled to the Moon with Apollo 11, the First Manned Lunar Landing, July 20, 1969/ APOLLO 11/ July 16-24, 1969/ Armstrong – Collins – Aldrin.” Because of its large size, the flag has been folded into fourths for mounting on the certificate (not examined out of frame).

“This really is a rare piece of space history,” Heritage Auctions Space Exploration Director Michael Riley said. “Flags that flew on the missions were smaller than this, almost exclusively. To see one this size is a real rarity, as it would significant strength to any space collection.” 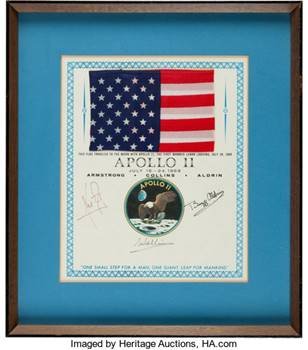 Carrying the same ($50,000-75,000) pre-auction estimate is an Alan Bean Original 1983 Painting “Mother Earth,” Acrylic on Masonite, Museum Framed. The stunning 24-by-30-inch painting – signed in the lower right: “Alan Bean © 1983” – is of the planet earth as seen above the lunar horizon, very reminiscent of the extremely popular “Earthrise” photo taken by Apollo 8.

A mission-flown Apollo 13 Flown Gold Robbins Medallion Originally from the Personal Collection of Mission Command Module Pilot Jack Swigert, with LOA (est. $40,000-60,000) is an extremely rare prize for collectors. Only six were produced – two for each member of the three-man crew. The dramatic design features three of Apollo’s chariot horses flying toward the moon with the slogan Ex Luna, Scientia – which translates to “from the moon, knowledge.” This is the first gold Apollo Robbins medal that Heritage ever has offered at auction. Its rarity, desirability, importance and beauty can not be overstated.

An Apollo 11 Flown Silver Robbins Medallion, Serial Number 405, Originally from the Personal Collection of Mission Lunar Module Pilot Buzz Aldrin, with Signed LOA (est. $30,000-50,000) was one of 450 flown aboard Apollo 11, the first manned moon landing, July 16-24, 1969, with crewmembers Neil Armstrong, Michael Collins, and Buzz Aldrin. The obverse of this 28mm sterling silver medal depicts Collins’ early and original concept for the mission insignia with the eagle carrying an olive branch in its mouth. NASA thought the sharp, open talons of the eagle looked too “warlike” and the olive branch, representing peace, was moved to the claws. This is one of, if not the only, major official item that renders the insignia as it was meant to be by the astronaut designer.

One extraordinary lot is the I.S.S. Expeditions 1 through 45: Complete Collection of Unflown Silver Robbins Medals Directly from the Personal Collection of Astronaut Walt Cunningham, with Signed LOA ($24,000-36,000). An amazing collection of rare, beautiful medals representing the first 13-plus years of occupation, by astronauts and cosmonauts from several countries, of the International Space Station, these medals from long-duration medals were issued in extremely limited numbers – often fewer than 100 each. All 45 medals are still in their original cases with serial-numbered (many in single digits) stickers and are in gorgeous mint state condition.