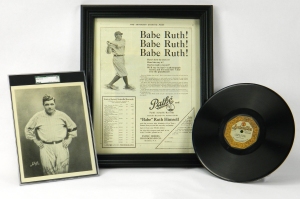 The Love of the Game Auctions Winter Premier Auction will feature the Pathe Freres Babe Ruth Collection.   Pathe’ Records was an international record label and phonograph manufacturer based in France.  Originally in the business of manufacturing phonograph cylinders, the company began making traditional “disc” records in the early 1900s, and while a major company in France, was largely unsuccessful in making a dent in the United States market.  In 1920, the company began marketing a new line of “needle-cut” records for the American market, which were designed to play on standard phonographs.

To help them break into that market, they turned to the “Home Run Monarch, idol of the baseball public, known by sight to millions who have seen him swing his famous black bat against the horsehide for the ’round trip.” 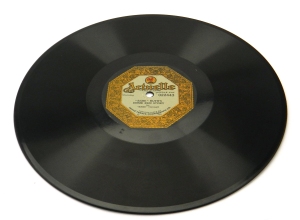 The record was marketed as a recording of Babe Ruth, telling a story, and sold for a dollar, primarily through the mail.  One “photographic print of his autographed photograph” was given away with the purchase of each record.  The record itself, which can be heard here, does not actually contain the voice of the Great Bambino, despite the fact that it was marketed as such – an interesting exercise in deceptive advertising for the time, as was the “photographic print of his autographed photograph.”

The photo, taken late in the 1920 season (Ruth’s uniform contains the black armband which memorializes Ray Chapman, killed on the field that August) is one of the most rare of all the 1920s Ruth items.  Pathe’ Freres was not a particularly successful company in the American market, their needle-cut records fizzling out in the US by 1920.  As such, the promotion was largely unsuccessful despite the massive popularity of Ruth, even as early as 1920.  The photo and record are considered very scarce today. 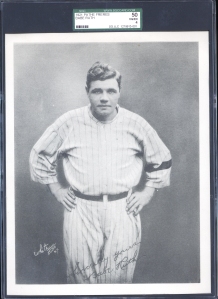 Our Winter auction will feature a copy of the “Home Run Story” record, the accompanying “autographed photograph,” and a framed print ad from the Saturday Evening Post promoting both.  The record is in VG to VG+ condition using record grading standards (we’re vinyl fans here at LOTG, though this record actually predates vinyl).  The 78RPM platter will play on conventional turntables that offer that speed, and while the record does exhibit considerable surface noise, it does play audibly.  The sleeve is in FAIR condition, intact with separation at the seams and very brittle, flaking paper (we did not attempt to photograph the record in the sleeve for concern with excessive handling of the brittle paper).

The card has been graded VG/EX 50 by SGC, an outstanding example with strong clarity and very little noticeable wear.  The framed print ad displays well, completing the collection – one of the more interesting and rare Ruth-related items from the dawn of his career.

Do we have your current address? Register now for our auction!

If you’ve changed your address recently, now is the time to make sure your address is updated in our system.  Without your current address, we can’t guarantee you’ll receive your catalog.

For sneak previews of the auction, be sure to visit our blog – there’s always something new, and we’re always looking for help solving mysteries!

About Love of the Game Auctions

Love of the Game Auctions is an internet sports auction house catering to the passionate collector of memorabilia and cards, brought to you by longtime hobbyist Al Crisafulli.  A collector for more than 30 years, Crisafulli’s successful track record in business led him to found an advertising and marketing agency in early 2004, where he combined his business acumen with his passion for the hobby, enlisting several hobby-related companies as advertising clients.  During this time he was responsible for providing marketing strategy, business consultation and overall strategic direction to auction houses, grading and authentication companies, and card dealers.

Consignments Wanted For Love of the Game Auctions Fall Auction