More than 850 lots were auctioned off in Grey Flannel’s December 11th Holiday Auction.  Lead by Basketball legend Pete Maravich’s LSU letterman jacket which sold for $116,924 and a 1957 Willie Mays bat gifted to a kid sold for $209,455 at the auction.  Check out all of the auction results from the auction here.

Pete Maravich collection
Maravich wore the 1969 letterman’s jacket for all three seasons that he played hoops at LSU. The jacket was obtained directly from his family. Maravich averaged 43.8 ppg as a sophomore and 44.2 as a junior. “Pistol” would graduate with 3,667 career points, a 44.2 scoring average and would score 50 or more points 28 times over his 83-game career at LSU. Also in the lot are Pistol Pete’s 1978 NBA All-Star uniform which sold for $34,243, his 1968, 69 & 70 NCAA First Team All-American plaques and the hoopster’s jacket that he wore at the 1987 Naismith Hall of Fame induction ceremony. The Maravich collection can be viewed here.

Willie Mays 1957 Bat
The Say Hey Kid is considered to be the greatest all-around baseball player. Mays’ bat comes with an LOA from the consignor that in part states, “I personally received this baseball bat directly from Willie Mays in 1957. I was lucky enough to be on the field with my mother pre-game during batting practice. Mays handed me his bat to hold while he penned his auto. I shouted to him about his bat and he replied with “keep it kid!” Accompanied by a PSA/DNA LOA grading the bat a GU 9.5 and our consignor’s LOA. Bidding began at $10,000. Additional informational on Mays bat can be found at here 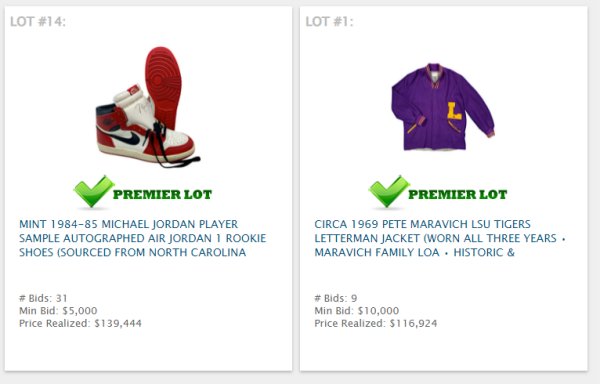 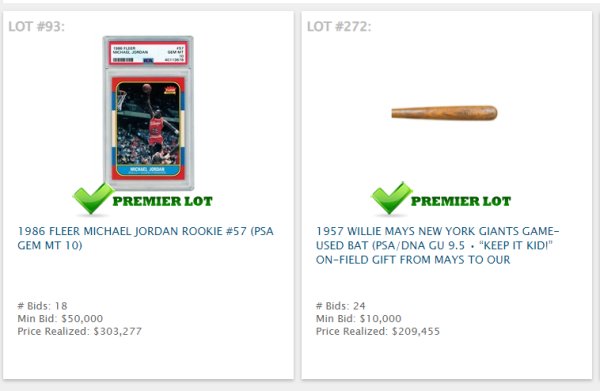 New Auction Coverage: Down to The Wire Auctions – A Family Business