For more than three decades, sports memorabilia impresario Ken Goldin has sold more than $600 million in memorabilia from many of the biggest names in sports, history and pop culture. But none have had the cultural importance as the headline item in the first auction of his new company, as Goldin Auctions offers for sale the original Pete Rose Banishment Document issued by the Office of the Commission Baseball on August 23, 1989.
The 5-page document officially ended a 6-month investigation by the Office of the Commissioner as to allegations that Rose bet on baseball while the manager of the Cincinnati Reds. The historic document, which was Rose’s personal copy, is signed by Rose, his attorney Rueven J. Katz, Commissioner A. Bartlett Giamatti and Deputy Commissioner Fay Vincent. The document comes with a Letter of Authenticity from Rose saying that this was his personal copy as well as full PSA/DNA LOA. Bidding, begins on October 10th, and is available now for preview at www.GoldinAuctions.com. 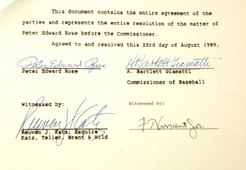 “The banishment of Pete Rose from baseball is one of the most significant events in baseball in the past 50 years, making this among the most important documents in baseball history, not just because if it’s significance but because it is the only known document signed by Rose, Giamatti and Vincent – the three key figures in the decision that has left baseball’s Hit King and one of the most popular players in baseball history exiled from the game for more than 23 years,” explains Goldin. “We know there are many baseball historians, collectors and Rose fans in Philadelphia, Cincinnati and around the world that will need to have this original document in their collections.”

For a complete look at the auction or to request a free full-color catalog, visit www.goldinauctions.com.

About Goldin Auctions
Sports memorabilia impresario Ken Goldin has sold more than $600 million in memorabilia from many of the biggest names in sports, history and pop culture and was the pioneer of using the medium of television to sell sports memorabilia. With the launch of GoldinAuctions.com he will continue to break new ground and offer collectors the best in memorabilia. GoldinAuctions features only a 10% buyers’ premium, one of the lowest rates in the industry. All autographed items come with LOA from first party authenticators or PSA/DNA. All game worn items come with team, player or MEARS/PSA/DNA full LOA. In addition to Ken Goldin, GoldinAuctions.com features a team of world-class memorabilia experts including; Harry Bryant, Rob Mitchell, Phil Spector, Rex Wang and Scott Gaynor. For more information visit www.goldinauctions.com.