Heritage is honored to present the first installment of significant buttons from one of the political hobby’s premier collections. The father and son collecting team of Sam and Jeff Pressman were among the earliest collectors to target only key items based on rarity, graphics, and condition. They assembled a superb, highly refined collection in the 1960s and early 1970s which will now be made available to a new generation of collectors through Heritage.

One of the Pressmans’ centerpieces is a black and white version of the familiar Whitehead and Hoag Cox-Roosevelt, normally seen in a brown coloration. The Pressman button is believed to be the only known example, and it has been speculated that it may have been a Whitehead and Hoag sample which never went into production. For comparison purposes we picture here the Pressman jugate along with a “standard” Cox-Roosevelt sold earlier by Heritage. 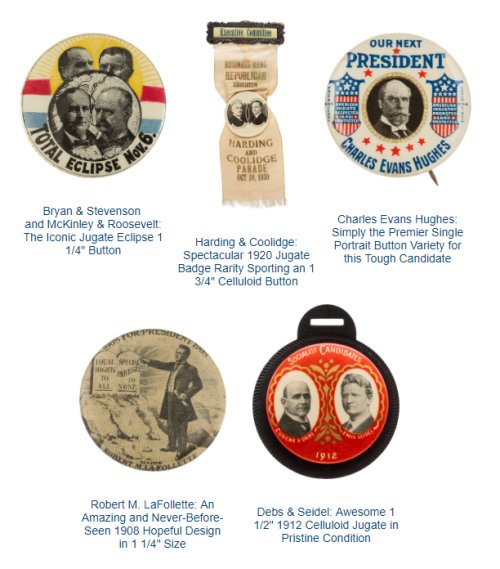 A few highlights from the Pressman collection appearing in the next auction: An iconic multi-color Bryan and Stevenson jugate “eclipse” button; a spectacular 1920 Harding and Coolidge jugate badge; perhaps the premier single portrait design from Charles Evans Hughes‘s unsuccessful 1916 campaign against Woodrow Wilson; a stunning 1912 Debs-Seidel Socialist jugate; and a never-before-offered 1908 “hopeful” button for Progressive champion Robert M. Lafollette. Please visit the preview section on our web site, HA.com, to see more exciting Pressman offerings! Below is a history of this collection written by Jeff Pressman.