President Barack Obama’s game worn high school basketball jersey is expected to bring $100,000 or more when it crosses the auction block Aug. 17 at Heritage Auctions. The jersey goes on public display for the first time ever in Chicago this week before it heads for New York and finally in Dallas.

Known for playing basketball at the White House, often with members of his staff or celebrities and notables, the No. 23 jersey issued by Hawaii’s Punahou School during the 1978-1979 season. It was worn by an 18-year-old “Barry” Obama during his senior year at Punahou as a member of the 1979 Hawaii State Champion boys’ varsity basketball team. 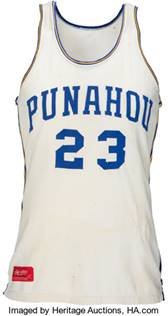 It was fortuitously rescued from being discarded when the new varsity jerseys arrived on campus after freshmen Peter Noble, three years behind Obama at Punahou, had worn the same number “23” jersey while on the junior varsity team.

Accompanying the jersey is Noble’s yearbook from Obama’s senior year. It features a quarter-page personal layout in the section dedicated to the graduating class, including a playground shot of the future President he labeled, “We go play hoop.” On page 104, a photo captioned, “Barry Obama goes up for a basket against St. Louis,” features the jersey he wears in the photograph.

Coincidentally, Obama’s jersey number 23 were and are worn by the two men most commonly identified as the greatest basketball players of all time: Michael Jordan and LeBron James.