As Americans prepare to head for the voting booth and pick the 45 President of the United States, Goldin Auctions is offering more than 20 lots of presidential memorabilia its annual October Legends Auction which runs through from October 29, at www.GoldinAuctions.com.

The most valuable and historic lot is President John F. Kennedy’s rocking chair from Air Force One (Lot #22). The chair was gifted by Jackie to brother-in-law and “Rat Packer” Peter Lawford. He asked for the chair knowing that it was the last chair JFK had sat in before his death. Jackie had the chair removed from the Presidential plane and shipped to Lawford, who for the rest of his life kept the chair prominently displayed in the game room of his Santa Monica home. Lawford’s fourth wife Patricia has signed a two-page statement relating the story of the chair as told to her by her late husband. The chair, manufactured by the P&P Company of Asheboro, NC measures approximately 44 inches in height and 27 inches at its widest, the woven seat 22 x 17 inches. Two of JFK’s other rocking chairs each sold for more than $400,000.

“This museum-quality artifact is truly historic and we are honored to be offering it for sale,” said Ken Goldin, Founder of Goldin Auctions. “Presidential memorabilia, whether it be personal artifacts, signed documents or even autographed baseballs is always a favorite of collectors. We are pleased to be offering a wide selection of these unique items at a variety of price points for any collector.”

The auction also features several rare original newspapers that reported historic presidential news including the most famous newspaper in American history. These include:

Also up for bids are several signed letters and documents from several Presidents including: 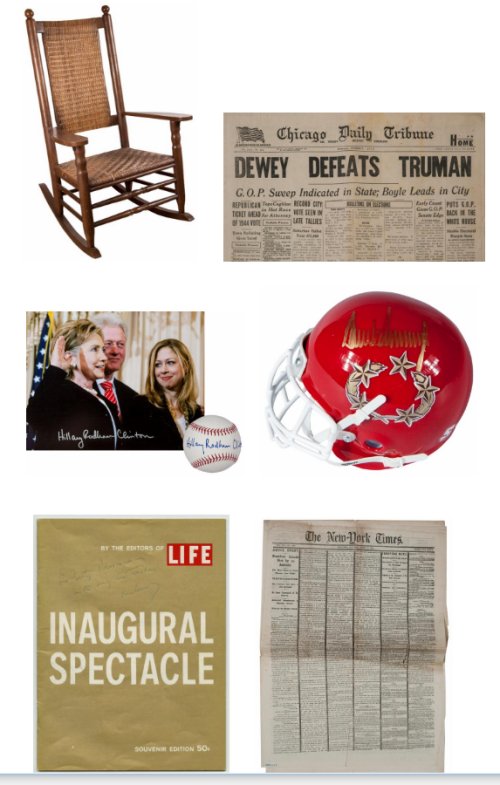