Bidding has begun for the summer Premiere auction from Love of the Game Auctions, an internet-based sports auction house catering to the passionate collector of cards and memorabilia.  The auction closing date is Saturday, August 29.  The sale features an outstanding collection of memorabilia and sports cards, and is highlighted by a rare and beautiful original Type 1 photo of Babe Ruth, dating in the 1915-19 era.  The photo was used in the 1920 Draper & Maynard equipment catalog, and features a young Babe, taking a practice cut in front of the Fenway Park grandstand.

The sale also features a unusual and interesting collection of 1952 Topps high numbers, highlighted by a gorgeous, sharp Mickey Mantle.  The collection is somewhat of a mystery, as it was discovered by a noncollecting, non-sports family amidst the childhood toys of their deceased father.  The small stack of 78 cards were tied together with a piece of twine, and appeared virtually untouched.

“The cards were incredible,” explained Love of the Game’s Auction Director Al Crisafulli. “I sat with the family in their kitchen, going through these cards one by one, and most of them were sharp and vibrant, like they were straight out of the pack.  Aside from the typical Topps centering issues, the only thing I noted was that some of the cards appeared a little narrow.”

Upon submission to PSA, most of the cards received grades between 6 and 8 (including a beautiful Ed Mathews rookie that graded EX-MT+ 6.5, and a gorgeous Jackie Robinson that graded EX-MT 6).  The Mantle, unfortunately, received an A grade. 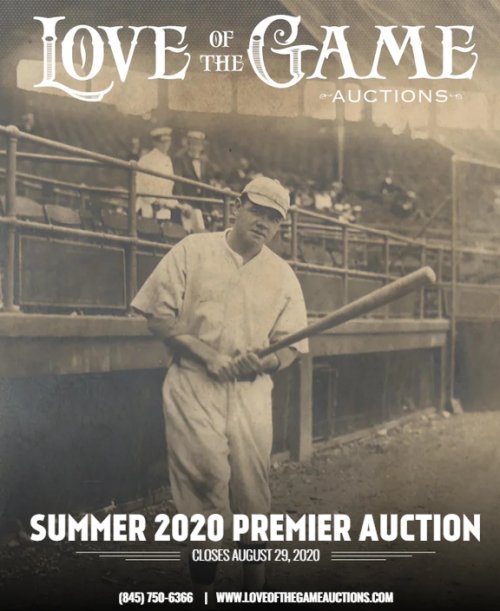 “The idea that these cards could ever have been trimmed seems very unlikely to us,” opined Crisafulli.  “The original owner has had them packed away in boxes for decades, and his family is unfamiliar with the hobby.  At the same time, there’s no question that some of the cards are narrow.”

“Regardless, the Mantle has got to be one of the most beautiful ‘Authentic’ examples in the hobby, and we think it has a good shot at setting a record for the highest price paid for a ’52 Mantle in that grade.”

Additionally, the auction includes a large collection of memorabilia from the Ted Patterson collection, including advertising display items, game-worn memorabilia, and cards.

Crisafulli explained that his favorite item in the auction was a beautiful full uniform worn by infielder Frankie Skaff of the 1944-46 Baltimore Orioles of the International League.  “I can’t believe how heavy it is,” explained Crisafulli.  “The flannel jersey and pants are thick and bulky.  On top of that, the stirrups are heavy, woolen, shaker-knit socks that go all the way to the knee.  I can’t imagine wearing these clothes in the middle of August, during the day.  They’re truly beautiful, though – an outstanding document of baseball coming out of the War.”

The auction includes Love of the Game’s typical assortment of rarely-seen card types, including many early Hall of Famers.  One of the most impressive assortments, however, is a group of 124 rare cards from the 1917 Collins-McCarthy set, including key cards like Honus Wagner, Ty Cobb, Walter Johnson and Grover Cleveland Alexander.

The auction also includes a large grouping of postwar cards, right up to some key present-day superstars and important rookie cards.

Over the years, Love of the Game has built a reputation for being an outstanding source for rare tickets, passes and game programs.  In addition to the outstanding grouping of World Series tickets and stubs, this auction includes a large assortment of important baseball and football programs, including World Series games, NFL championships, and milestone games (like the first-ever game played by the Dallas Cowboys).

Keeping in line with Love of the Game auctions’ specialties, the sale features a large selection of 19th and early 20th Century cards and memorabilia, a host of seldom-seen or unique items, an exceptional grouping of tough prewar type cards, and a number of seldom-seen vintage baseball photos.  One of the company’s finest auctions yet, Love of the Game continues to build its reputation as an auction house for unusual items that you don’t see every day.

The final date to bid is Saturday, August 29.  To register for the auction and review the selection online, visit http://www.loveofthegameauctions.com.

Love of the Game is already in the process of assembling its Fall, 2020 catalog auction, which they hope will prove to be its biggest and most exciting auction yet.  For more information, or to consign your valuable material, contact Love of the Game at info@loveofthegameauctions.com or (845) 750-6366.