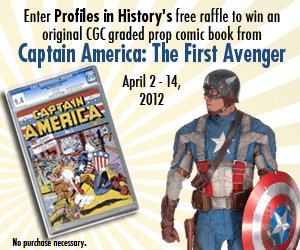 Prize Details: One original prop Captain America Comics #1 with blank interior pages made for the film production of Marvel Studios’ Captain America: The First Avenger (2011) graded by CGC. Prize Eligibility: Only persons residing in United States who are at least 18 years of age can enter. Raffle Starts: April 02, 2012 @ 06:00 am (PDT). Raffle Ends: April 14, 2012 @ 03:00 pm (PDT). Need more Details? Read the Official Rules here. Captain America: The First Avenger Auction! Profiles in History is thrilled to be working with Marvel Entertainment to present this historic offering of items from the film. Bidding is now open and ends on April 14, 2012.  Rarely does a collector have the opportunity to acquire items of this importance and provenance from a contemporary film, and this sale features over 200 lots, including virtually all of the iconic costumes, props and vehicles from the film. The selection showcases the imagination, incredible craftsmanship and imaginative technology created to portray the story of super-soldier Captain America, one of the most iconic characters in the Marvel canon.

Profiles in History is proud to announce its association with Marvel Entertainment to hold the Captain America: The First Avenger Auction at this year’s C2E2 (Chicago Comic and Entertainment Expo) at McCormick Place, 2301 S. Lake Shore Dr., Chicago, IL 60616 at 6PM Central Time on April 14, 2012.