With a little over a week until their four day July Hollywood auction, Profiles in History, run by Joe Maddalena, is proud to announce that the largest collection of Cracker Jack toy premiums ever amassed will be up for auction. The Cracker Jack toys are a part of The Dreier Collection, which will be auctioned off on, Saturday, July 28th. Their Animation Auction will be, Sunday, July 29th, and the Treasures from the Hollywood Vaults auction has been moved to, Monday, July 30th and Tuesday, July 31st. All auctions will take place in Los Angeles.

When German immigrant Frederick “Fritz” William Rueckheim and his brother Louis concocted an early version of their popcorn, molasses and peanut confection at the 1893 Chicago World’s Fair, they called it simply, “Candied Popcorn and Peanuts.” But in 1896 Fritz devised a way to keep the popcorn kernels separated by adding a small quantity of oil to each spinning vat. Prior to this innovation, the product stuck together in chunks. In 1896, the first batch of “Cracker Jack” was made. 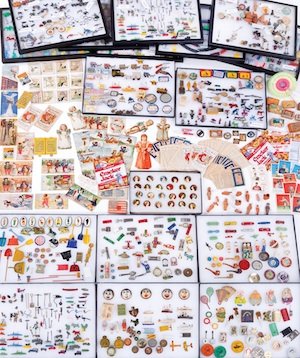 An enthusiastic customer is said to have coined its household name by exclaiming, “That’s crackerjack!” Later, the song, “Take Me Out to the Ball Game” gave Cracker Jack priceless publicity for free when the line, “buy me some peanuts and Cracker Jack!” was first sung in 1908. In 1912 mystery novelty items or “prizes” were included in every box of Cracker Jack. Among the very first prizes were baseball cards. Over time, prizes have included everything from charms to whistles; from tin toys to temporary tattoos. The original tagline for Cracker Jack was, “Candy coated popcorn, peanuts and a prize.” The prizes attained pop-cultural fusion with the term, “came in a Cracker Jack box,” referring to an object of limited value. To this day, Cracker Jack mystery prizes are as popular as the product itself.

In this special collection, you’ll find some of the earliest, rarest and most sought after examples of Cracker Jack memorabilia in existence. It spans a century and is the most extensive single private collection ever assembled for offer to the public. Profiles in History strongly encourages interested parties to come view this massive collection in person at their offices.