PSA Authentication and Grading Services will be at The 40th Annual National Sports Collectors Convention, July 31 – August 4, 2019 at Booth #1436.  Check out all of the grading and authentication specials below that will be offered during the convention, plus PSA to Host Card Grading Competition with the winner walking away with $1,000 and PSA to Award ‘Jordan a Day’ Giveaway. 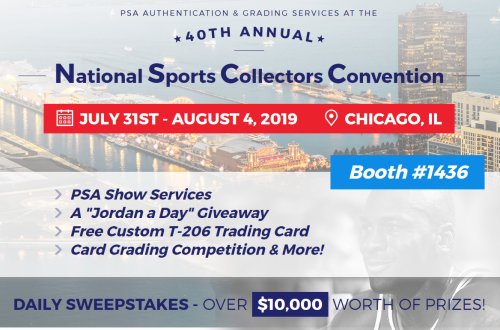 PSA On-Site Authentication & Grading
Our only show grading of the year! Submit during the National and get your autographs and cards back by the end of the show!  PSA will be providing on-site authentication, grading and encapsulation for all items except for tickets and packs. To receive access to PSA’s special “Express Line” at the show, be sure to use the online submission center to place orders prior to visiting the booth. PSA will also be offering authentication for items signed at the show for a discounted rate of $10. For additional details on PSA’s special pricing at The National, visit www.PSAcard.com/National. Finally, PSA Customer Service will be accepting any take-home trading card and autograph authentication submissions for all levels of service.

PSA’s National Card Grading Competition
Show your skills & you could win cash! Join us at the PSA booth to test your grading skills on 25 encapsulated vintage and modern trading cards.  For the first time ever, PSA is hosting a “National Card Grading Competition” at this year’s National. The contest, which is open to 77 contestants, will be held at PSA’s corporate booth and the overall winner will walk away with a $1,000 check! The entry fee is $20 and each participant will have 15 minutes to grade 25 encapsulated vintage and modern trading cards. To sign up, visit PSA’s National Card Grading landing page. The winner will be announced on Saturday, Aug. 3, at 4 p.m. CDT at the PSA booth.

“Card grading is both a fun and challenging pursuit, so we expect this competition will be a popular attraction during the National,” said PSA President Steve Sloan. “It’s not the easiest of assignments, so it will be interesting to see not only who competes but who ultimately wins.”

Contestants will first need to pay a $20 entry fee to secure a grading slot. Once their day and time slots are finalized, they will each have 15 minutes with which to grade a total of 25 different encapsulated vintage and modern trading cards. The test will include counterfeit cards as well as “no grade” cards. Contestants are encouraged to show up at least 10 minutes early for their one and only card grading opportunity. To sign up for the contest, visit PSA’s National Card Grading Competition landing page. “PSA’s grading competition should prove to be enlightening and entertaining for everyone attending this year’s National,” added Sloan.

PSA’s “Jordan-A-Day” Giveaway
Professional Sports Authenticator (www.PSAcard.com) is once again ready to provide onsite grading and produce free, custom encapsulated trading cards for collectors at the fast-approaching 2019 National Sports Collectors Convention in Chicago from Wed., July 31, through Sun., August 4, at the Donald E. Stephens Convention Center in Rosemont. To start, PSA is hosting a “Jordan a Day” daily sweepstakes and will be giving away a trio of 1986 Fleer Michael Jordan #57 rookie cards valued at more than $10,000 during three select days of the show: Thurs., Aug. 1; Fri., Aug. 2; and Sat., Aug. 3. The three different PSA-graded ‘86 Fleer Michael Jordan #57 RCs of the Chicago Bulls Hall of Famer (PSA NM-MT 8, PSA NM-MT+ 8.5 and PSA MINT 9, respectively) will be randomly awarded. Sweepstakes entries can be made in person at the PSA booth (#1436) or online at www.PSAcard.com/National. Winners need not be present and will be announced at 4 p.m. CDT at the PSA booth during each of the three designated days.

2019 NSCC Fantasy Promo Cards
Join the Platinum PSA Collectors Club to get a set of five NSCC exclusive Fantasy promo cards. Limited quantities. While supplies last!  PSA has produced an incredible, limited-edition set of five “2019 NSCC Promo” cards that features baseball legends Ty Cobb, Honus Wagner, Christy Mathewson, Nap Lajoie and “Shoeless Joe” Jackson. Exclusively distributed at the National, the complete set of all five promo cards will be given to new PSA Platinum Collectors Club members who either purchase memberships at the show or who attend the show and provide their proof of purchase (after July 1, 2019) for those memberships secured online. New PSA Gold Collectors Club members who attend the show and provide proof of purchase will be randomly awarded one of the five promo cards. The promo card set is being sponsored by Mile High Card Company.

Click here for more detailed information on all of the services/activities listed above.

PSA is the world’s largest trading card, autograph and memorabilia authentication and grading service. Since 1991, PSA has examined and certified over 33 million collectibles with a combined value of over $1 billion. For more information, visit www.PSAcard.com.