Although somewhat cooled down from the scorching 2016, the hobby continued to thrive in 2017. Hot cards, especially those with Mickey Mantle’s name affixed, continued their hot streak, and auction prices realized continued to soar.

Another constant in the hobby continued to hit its mark in 2017, Professional Sports Authenticator (www.PSAcard.com). PSA along with PSA/DNA, its autograph authentication division, certified a treasure trove of incredible items from across the hobby, resulting in 10 of the most valuable collectibles sold in 2017.

With a combined value of $6.7 million, the company again made an impact, certifying items spanning from an iconic, signed Norman Rockwell painting to the hobby’s Holy Grail: the 1909-1911 T206 Honus Wagner card. 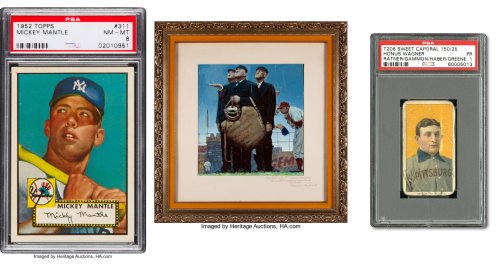 “Though we’ve whittled it down to 10, we certified a myriad of incredible items last year, and the list is full of sports history from top to bottom. We’ll continue pushing ourselves toward another great year in 2018, and look forward to what’s in store,” said PSA Vice President Steve Sloan.

Topping the list is one of Norman Rockwell’s iconic pieces, signed and inscribed by the artist, and gifted to legendary umpire “Beans” Reardon, and rounding out the list is none other than Mantle’s most coveted card, his 1952 Topps #311.

Here is the complete list, in order of auction prices realized:

PSA is the world’s largest trading card, autograph and memorabilia authentication and grading service. Since 1991, PSA experts have examined and certified over 29 million collectibles with a combined value of over $1 billion. Find more information at www.PSAcard.com.