Professional Sports Authenticator (PSA) has now certified more than 30 million different trading cards, autographs and sports collectibles since its inception in 1991. The historic milestone was reached earlier this week with the certification of a 2000 Playoff Contenders #144 Tom Brady autographed rookie card. The item, which received a grade of PSA Near Mint-Mint+ (NM-MT+) 8.5, was submitted by a longtime trading card collector from Tampa, Florida, who wishes to remain anonymous.

“PSA is certainly very proud of reaching this significant number,” said Joe Orlando, president of PSA. “We’ve had so many different collectibles come through the doors here over the years that it seems only appropriate that future NFL Hall of Fame quarterback Tom Brady’s signed rookie card was recognized as our 30 millionth certified piece.”

The prized 30 millionth collectible was originally released as part of the 2000 Playoff Contenders football card set. Beyond its 100 base level cards, the set includes 50 NFL Rookie Ticket Autographed cards, 40 NFL Europe Rookie Ticket Autographed cards and 10 NFL Playoff Ticket Veteran Autographed cards. Brady, who was selected by the New England Patriots in the sixth round (199th pick overall) of the 2000 NFL Draft, graces card #144. The signed example features an embossed “Playoff Authentic Signature” stamping on the card front and a gold-foil ticket design along the right side.

One can only imagine the variety of submissions that have been certified as authentic and/or graded by the experts at PSA, a division of Collectors Universe (NASDAQ: CLCT). Among the certified items are the hand written “Laws of Base Ball” documents from 1857 that sold for $3.26 million in 2016 and a baseball bat used by Babe Ruth to hit the very first home run in the original Yankee Stadium on April 18, 1923, that sold for $1.2 million in 2004. Other significant certified pieces have included Jackie Robinson’s signed Brooklyn Dodgers contract from his color-barrier-breaking 1947 MLB season, and the historic “Lucky 7 Find” of seven rare 1909-11 T206 Ty Cobb baseball cards with ultra-rare Ty Cobb backs. 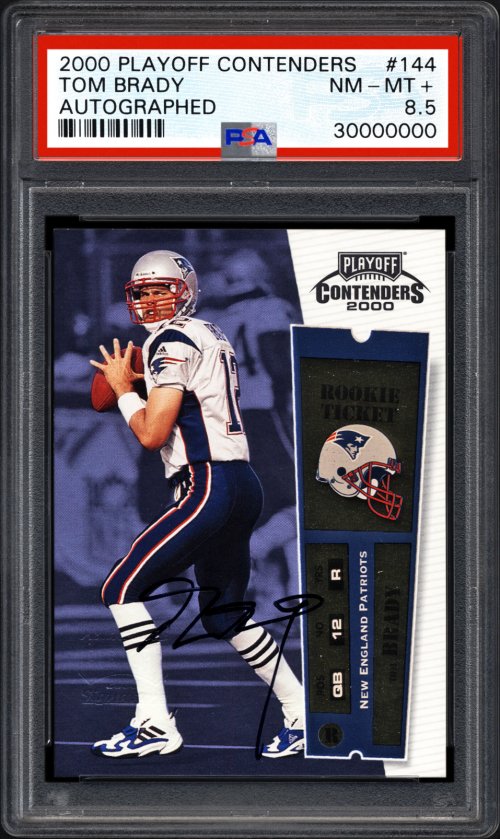 “It’s a true testament to our expertise that so many collectors, year after year, put their trust in PSA,” added Steve Sloan, vice president of PSA. “We’re honored to be recognized by the collecting community as the longstanding industry leader in third-party authentication and grading.”

PSA is the world’s largest trading card, autograph and memorabilia authentication and grading service. Since 1991, PSA experts have examined and certified over 30 million collectibles with a combined value of over $1 billion. Find more information at www.PSAcard.com.