PWCC Marketplace is excited to announce the results of its January Premier Auction. The auction featured 261 assets across baseball, basketball, football, hockey, soccer, Pokémon, Magic The Gathering, and more.  Total auction sales were $11,875,800. Multiple records and interesting price points were set in the auction. They are listed below.

NOTE: The PWCC Sales History shows if a payment on a final sales price is still pending. When a payment is received, it is updated as a final sale in the history tool. In the rare case where a payment is not received, the entry is removed from the sales history.

1997 Upper Deck Game Jersey Michael Jordan PATCH AUTO /23 #GJ13S BGS 8 NM-MT
This copy of Jordan’s autographed Upper Deck Game Jersey card sold for $840,000 Thursday night. It is now tied for the sixth-highest selling Jordan card of all time. Upper Deck released just 23 copies of this card, only one of which is graded higher than this example by BGS. Of note on this asset is the 10 autograph, a difficult designation to achieve due to the card’s unique surface. 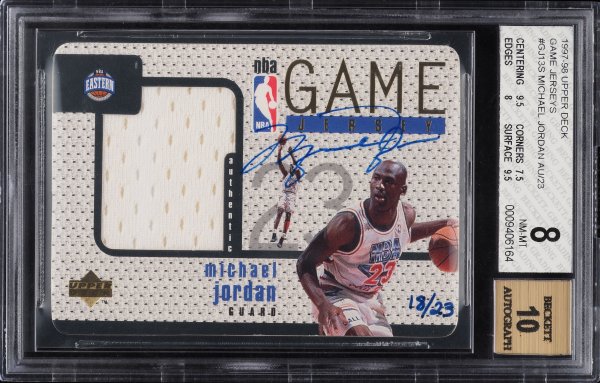 1978 Topps Paul Molitor & Alan Trammell ROOKIE #707 PSA 10 GEM MINT (PWCC-E)
This quad rookie card sold for a total of $66,000, breaking the record for highest-selling trading card for either Molitor or Trammell. PSA has deemed only 29 copies out of the 8,108 produced a perfect Gem Mint 10, meaning this copy is in the top .3% of this card in terms of quality. The record-breaker also earned PWCC’s “Exceptional” designation for Eye Appeal, putting this copy in the top 15% of those 29 Gem Mint 10s.

1991 Michael Jordan “The Move” NBA Finals Original PSA Type I Photograph
Photographer Carl Sissac’s original oversized print of Jordan’s famous “Phantom Move” against the Lakers in the 1991 Finals sold for $20,400 Thursday night. This sale is the most ever paid for a photo of “His Airness” from the 1990s. It also marks the third highest sale of a Jordan photo to date.

2015 National Treasures Clutch Factor Kobe Bryant PATCH AUTO DNA 10 1/1 PSA 10
This card, featuring an incredible autograph by Kobe from his last active year in the NBA, sold for $36,000 Thursday night to set a “for card” record. PSA gave both this 1-of-1 Masterpiece and Kobe’s autograph a 10 grade.